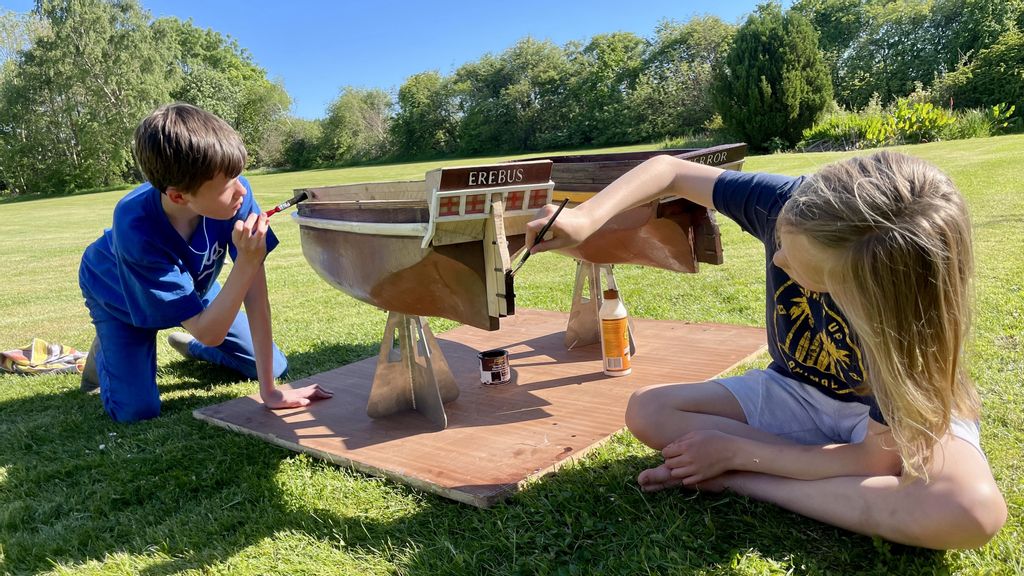 Two young brothers whose toy pirate ship sailed across the Atlantic are now recreating a Michael Palin book – by building two warships for an expedition to the Antarctic.

The account of the famous James Clark Ross expedition was a voyage of scientific exploration of the Antarctic from 1839 to 1843.

The two boys from Turriff, in Scotland’s Aberdeenshire region, in the United Kingdom, have built scaled wooden replicas of warships HMS Erebus and sister ship HMS Terror for their unmanned “citizen science” mission – where they will be following the circumpolar current around Antarctica.

They are working their way through a bucket list of 500 adventures which have included sending Lego figures “into space” and spending the night in a cave.

They made headlines when their toy Playmobil pirate ship reached the Caribbean after it was launched into the Atlantic around 100 miles off the coast of Mauritania.

The new voyage is the latest adventure for the impressive brothers – who previously set the world record for the longest distance traveled at sea by a toy boat.

Father of Ollie and Harry, MacNeill Ferguson, said: “Ollie and Harry were enchanted by this extraordinary book whose story leapt off the page and entered their imaginations.

“We used the account partly for inspiration and as a real source of reference for understanding the ships when we were building them.

“Because it’s told as a story – written in a much more relaxed manner than an historical account – the boys were able to digest it.

“It enabled them to get a feel for what life was like on the boats and to gather information that wasn’t really available anywhere else for us.”

The approximately 3-foot-long scaled vessels are set to depart by plane in the next few weeks from Scotland to South Georgia Island in the Southern Atlantic, where they will then be launched.

Once the boats arrive in South Georgia, they will be handed over to the territory’s government, who will take the boats on board a fisheries patrol vessel.

From here, the boats will be launched 160 kilometers (100 miles) north into the Antarctic Circumpolar Current.

The two boats are both equipped with a custom-made onboard tracking and monitoring system, provided by wireless technology company Icoteq.

“The equipment, which also includes a forward-facing camera, will also enable position and scientific data to be sent back to us using an ARGOS satellite communication link.

“If low-cost sensors combined with citizen science, can contribute to the gathering of important scientific data, it could open the doorway for larger scale monitoring at a fraction of the price.”

Icoteq – whose previous work includes developing a new generation of satellite tracking equipment for sea turtles – will feature a dedicated Erebus page on its website with a map that will track the two boats, along with a monthly camera image sent via satellite.

Palin’s ‘The Story of a Ship’, published in 2018, tells the story of the boat’s launch in 1826 and her epic voyages of discovery in the Antarctic to ultimate catastrophe in the Arctic.

Michael Palin is perhaps best known as one of the members of the iconic comedy troupe Monty Python.