Comedian and political commentator D.L. Hughley scorched Jada Pinkett Smith recently, denouncing her behavior during her romance with singer August Alsina as “predatory.” “I’m not in anyone’s relationship business but when they (Will and Jada Pinkett Smith) were saying, ‘He was mentally sick and he was emotionally sick’ – that’s predatory.” As most of popular culture […]

Could you choose polygamy over consistent cheating? Does honesty add shame? 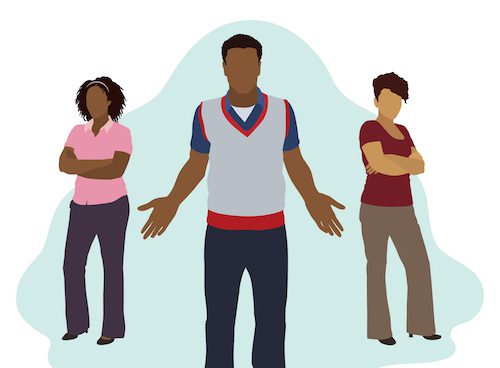 I was having a deep conversation with a girlfriend who is seeing a guy with a known wandering eye. She filled me in on the latest woman she discovered her man was cheating with. She compared herself to the other woman and exclaimed her disgust at the fact that he would deal with this particular woman […] In the face of the damning release of his tax returns Republican presidential candidate Donald Trump has turned to personal attacks on his opponent. Since his disastrous performance during the recent presidential debate Trump has been exposed as a racist, narcissistic, lying businessman who is trying to sneak into the Oval Office on populist conservative vitriol. […]

Deitrick Haddon: ‘I feel like God has given me a second chance’

“Preachers of L.A.” star Deitrick Haddon knows he’s been given a second chance and intends to make the most of it. “I feel like God has given me a second chance at marriage, at life, and at ministry. So now I’m determined to do it my way … Do it God’s way, but do it […]

What’s wrong with brothers? Apparently, Timothy Hunter, 29, wants to promote stereotypes. The husband and father allegedly staged a home invasion after going into a jealous rage. The Volusia County, Fla. man suspected that his wife had cheated on him. When Volusia County Sheriff’s Deputies arrived at his home on Wednesday, May 15, they found […]

“A new crisis of infidelity is emerging…” –American Association for Marriage and Family Therapy.

In a nutshell, there are a lot of married girls going wild.

Newlywed Cheaters: Top 10 Cheating Cities In 2009, a disturbing trend emerged: more newlyweds cheat before the ink is dry on the marriage certificate: “Infidelity is very common during the first year of marriage,” says Bonnie Eaker Weil, Ph.D., author of Adultery: The Forgivable Sin. Regretfully, the trend continues, and may contribute to the 53 […]