Kanye West helped by Republicans to get on several state ballots

Kanye West is being aided by multiple Republican operatives to get on the presidential ballot in several states. In short, the GOP is helping a man who has never voted in his life, who has demeaned abolitionist heroes like Harriet Tubman, who has said being in slavery was a choice and who is apparently in […] 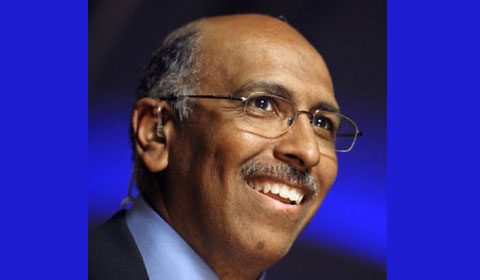 Michael Steel earnestly believed that the voices of Black conservative voters could be better served and heard by the Republican party. So vehement was his belief and support in “The Party of Lincoln” that he was later appointed Republican National Committee chair. This was a major deal among many Black conservatives who felt their voice would […]

The presidency of Donald Trump has once again proven the business mogul to also be a savvy New York con man. The recent Congressional action to repeal and replace Obamacare was met with cheers by the GOP establishment. Congressmen were actually called to order after the slim margin of victory of 217 – 213 to […] Donald Trump’s Republican nomination acceptance speech is now available on video. While he didn’t mention sex a single time, it is hard not to look at him without thinking about his past sexual innuendos: ‘Blood coming out of her wherever,’ ‘Mitt, drop to your knees,’ and his clarifying the record regarding his “small hands.” The […] When Donald Trump announced his candidacy for the 2016 presidential race, we expected this to be a different type of campaign. Before his foray into politics, Trump was well-known for his sarcasm and extreme, often distasteful comments. Speculation was made on how much the TV personality would have to change in order to be taken seriously as a viable Republican candidate for president. To the surprise of some, Trump […]

Donald Trump blames #BlackLivesMatter for not getting Black pastors’ endorsement What was supposed to be a huge press conference to announce that a group of 100 Black pastors and religious leaders were officially endorsing Donald Trump’s bid for president quickly turned into a closed door meeting later described as an “informational meet and greet” by Trump’s campaign organizers. But did Trump ever really have the […] This is our fault. On June 16, two days after his 69th birthday, Donald Trump announced his presidential campaign with hopes  to “Make America Great Again” (a phrase coined by Ronald Reagan that Trump has trademarked despite every politician in modern history saying some version of this sentiment). Since his declaration, Trump has been on […]

Most interesting responses to #ThingsThatUpsetLiberals hashtag on social media

The hashtag “Things That Upset Liberals” (#ThingsThatUpsetLiberals) incited a stampede on social media that ranged from hilarious to vulgar. Take a look at the interesting and hilarious responses below:#ThingsThatOffendLiberals When you remind them that the KKK was founded by [email protected] Party.#ThingsThatOffendLiberals Pointing out that obama is continuing the same Bush policies that they hated when […]

The GOP changes rule in hopes you don’t notice

“They don’t mind getting a few of their own (in order) to get to you, to maintain power.” — Minister Louis Farrakhan, circa 1990 Contrary to popular and erroneous beliefs, white Americans actually represent the largest group of poor people in America and those who subsist on government welfare and food stamps. Subsequently, in light […]

A former Texas GOP chair and current Texas Eagle Forum president, gave a pre-election address earlier this year, claiming that a “Marxist” President Barack Obama had “fried his brain on drugs.” In a speech at a Grassroots America We The People “Call to Action” event, Cathie Adams embarked on a long-winded conspiracy theory about Obama enacting an oppressive “green […]

Although economics is rarely discussed in the African American community, and the LIBOR scandal and what is going on in Europe is of interest to a only few of us, if Mitt Romney wins the presidential election in November, many African American families will see their taxes increase, while 100 percent of millionaires will get […]

Just from the trailer alone, HBO’s “Game Change,” the pay cable network’s feature film about Sen. John McCain’s failed 2008 presidential campaign, is an engrossing probe behind the political curtains into what really went down in the days leading up to the GOP convention. The Tom Hanks-Gary Goetzman film offers enticing peeks into the reasoning and rationale […]

For the past 12 years, in some form or fashion, Mitt Romney has been trying to persuade people to consider him for any high level political office.  Nowhere have his intentions been more evident than in his quest to grab the holy grail of politics in the U.S. — the presidency. Unfortunately, he is a […]

It’s unequivocally clear what the Republican Party’s strategy is to wrest President Obama and his family from the White House: a deliberate, premeditated attempt to appeal to the darkest impulses of the human spirit by arousing the racially charged emotions and prejudices of their constituents. The plan, as exhibited by longtime GOP flamethrower New Gingrich […]

“I have never acted inappropriately with anyone– period!”  –Herman Cain GOP presidential candidate Herman Cain has tried a few different strategies to fend off accusations from the women who claim he sexually harassed them more than 10 years ago — the most recent from a fellow Republican who says he tried to force her to […]

A Virginia county GOP committee sent a mass email out that included an image of President Obama as a zombie with a bullet through his head. The image also includes a picture of a disfigured Nancy Pelosi. “We are going to vanquish the zombies with clear thinking conservative principles and a truckload of Republican candy,” were the […]