When Houston resident Amber J. Benoit met her husband Brandon, she was keeping a little secret. The Louisiana native and customer service representative was losing her hair. Well, there was more. She had a little crush on him and she was falling fast. But, she wondered, if she got the man, could he handle her secret? What developed is a story of love and acceptance we could all stand to take notes from. Read her story below and get the tissues ready for some Black love tears:

Amber’s story in her own words: I knew him for a while but I always looked at him as a little boy. He was so cute and that smile always got me. (Just thinking about that smile now … whew …) We flirted a lot, but I never took him seriously because he was a little boy. He’s seven years younger than me.

Well, I was having a party for my 35th birthday and I invited him and decided if he shows, he’ll be my birthday kiss. For some reason, he didn’t show up. I was like … eh … ok.

So, we would still flirt. I fussed at him for not coming to the party and he would try to plead his case. One day, he came to my house to get a haircut from my brother. My brother was like a big cousin to him. A few days later, he came back with a cousin of mine. He told my cousin he didn’t need a haircut; he was coming there to get me!

That was on Oct. 8, 2013. We have never been separated since that date. We were married on Aug. 8, 2014. We had only been together for 10 months the day we got married. He is an awesome husband. He is my husband. I’m sure every lady reading this can feel me when I say that!

I began to lose my hair before we got together. I remember standing before him and pulling off my wig … no makeup … just bare … all flaws exposed. I waited for him to get up and leave. He looked up at me and said, “I don’t see a damn difference, now move … My show on!” I busted out laughing. On Sept. 3, 2016, I decided to cut my hair. It was a long, thoughtful, shameful, exposing process. Like, the world would see me with a bald head. I had literally grown sick of being ashamed, but I was still ashamed. I told my husband what I wanted to do. I wanted to know if he would have a problem being seen with me in public. He said, “OK, baby. Do what u do.” I went to the bathroom with my scissors and razor. I didn’t come out until I was completely bald. I walked out, looked at my husband and the look in his eyes made my heart melt.

Today, I’m free to be me. I have accepted all my flaws or things I felt were my flaws. To have a love of this magnitude is almost unbelievable.

Show Amber and her husband some love below in the comments. Share your stories of love and acceptance. 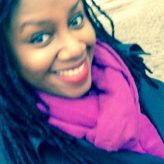 A novelist and essayist, Calaya Michelle Stallworth is a creative writing professor in Atlanta, Georgia. She earned a doctorate in English at Georgia State University. She has published ten novels under the pen name Grace Octavia with Kensington and Harlequin. Instagram: @blackwritergonerogue