Skip to content
Culture » Jason Orr is the genius behind ‘FunkJazz Kafé: Diary of a Decade’ film 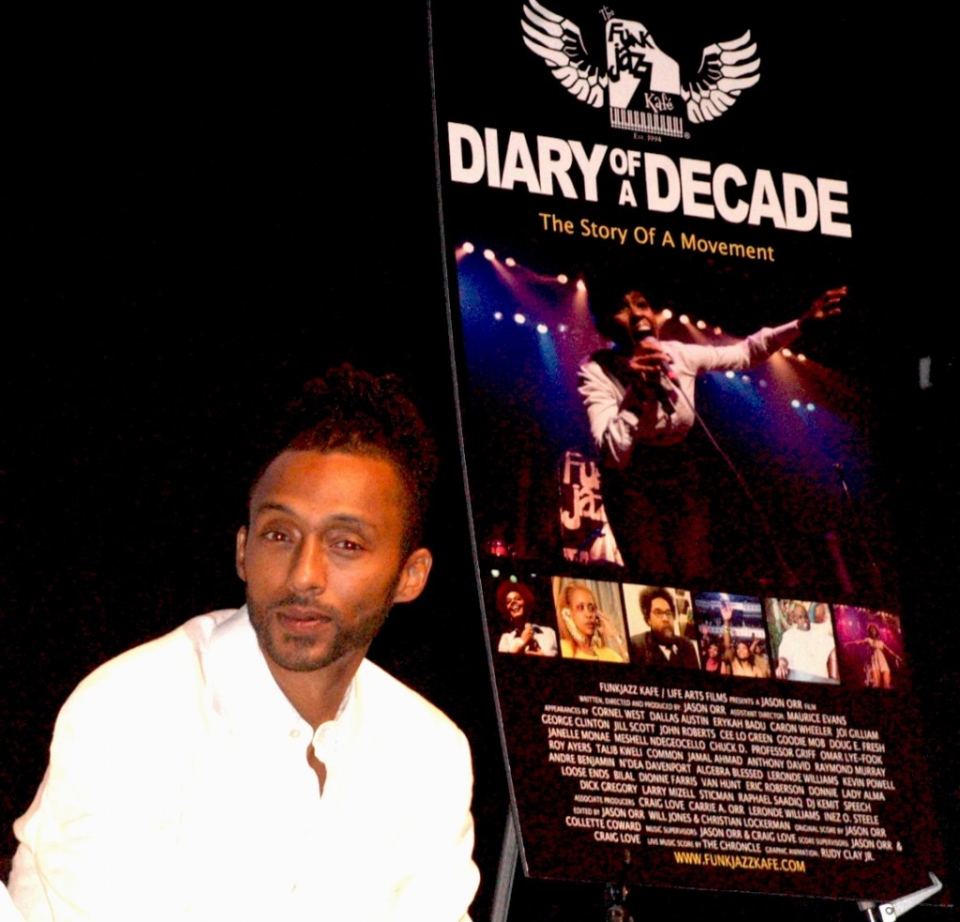 Meet producer extraordinaire Jason Orr, founder of the FunkJazz Kafé Arts & Music Festival, and producer writer and director of the award-winning film, FunkJazz Kafé: Diary of a Decade. Find out what he has in store with his current film that he’s been touring around the country and his other upcoming film projects.

Take us back to the moment when you first believed that you had what it takes to be a successful director.

Just from producing FunkJazz Kafé Arts & Music Festival, I knew I could tell the story that’s in our documentary film, FunkJazz Kafé: Diary of a Decade (The Story of a Movement) better than anyone else. I’m the only one that would know all the unique story angles that made this true story possible. The film is narrated by Chuck D (Public Enemy), with appearances by Janelle Monae, Dr. Cornel West, Dick Gregory, Jill Scott, CeeLo Green, Erykah Badu, Roy Ayers, Jamie Foxx, George Clinton, Public Enemy, Andre 3000, Bilal, Organized Noize, Doug E. Fresh, Joi, Meshell NdegeOcello, OutKast, Dionne Farris, Van Hunt, Speech and more. Of course, when you enlist the characters and individuals who were witnesses to the subject matter and changes firsthand, you can get an honest “inside perspective” of the greater relevance of social history to our broader story of music and its impact on people and their communities. I was also getting good practice as a director with the short film music videos I did with Meshell NdegeOcello, Van Hunt, Dionne Farris, Wes Felton and Soul Of Earth. Looking forward to seeing my entire body of work as a director in the future!

Are there politics involved with being a successful director?

Absolutely. You get more calls for more interesting projects that you would not be considering yourself unless someone offers it to you. When your buzzing in the right circles you can definitely attract more projects to not only direct but sometimes contribute as a writer or even get on board as a producer to assist the project further along.

Politics aside, let’s focus on the art. What inspires you as an artist?

Well, since I do films, festivals, visual art, write poetry and music, there is a lot that motivates me differently for each discipline at any given time. Spirit, life, intrigue, mystery, history, magic and discovering something that was once unknown. Just a new creation itself being manifested in the physical is exciting. A vision that becomes a reality from thin air gets me going!

How do you know when you’ve come across source material that has the potential to be special?

When there is intrigue surrounding a subject and can use more clarity. I often gravitate towards stories or projects that are agents of social change. We’re in an era where we can produce projects on a lot of our true stories regarding love, family, music history, social engineering, overlooked iconic individuals, historical game-changers from our communities, parts of the world or life that have been overlooked, ignored and/or criticized.
Tell us one thing that you are incredibly excited about on the horizon?
Well, it’s certainly more than one thing I’m excited about but I will give you a couple of film projects. Next is Maynard, the game-changer and first African American mayor of a major southern city, Maynard H. Jackson Jr. and his contributions to Atlanta and the world. I’m not directing, I’m a producer on the project. It is directed by Emmy-winning director Sam Pollard (Slavery By Another Name, Eyes on the Prize, Four Little Girls, Sinatra, When The Levies Broke). There’s some great social innovators, civil rights leaders, politicians and former presidents on this one and will certainly be inspiring and unforgettable! Other documentary films that I’m doing are Stepping Into Tomorrow, (with musicologist, Jamal Ahmad) on how the musical innovations of jazz-funk fusion changed the musical landscape and subsequently the world. It features pioneers like George Duke, Marcus Miller, Al Jarreau, Foreign Exchange, Jazzy Jeff, Pete Rock, Ramsey Lewis, Roy Ayers, Lonnie Liston Smith, Robert Glasper, Bilal,  Snarky Puppy, Liv Warfield, KING and many others! Then there’s the Roy Ayers documentary on his life in music! Excited about all three of those! And I always get excited about the 50th FunkJazz Kafé Arts & Music Festival and our third FJK Documentary Film Festival + Music Conference! Good stuff on the horizon!

What activities do you like to do when you need to completely disconnect from the work?

It’s all really integrated lifestyle for me so I’ve learned to enjoy and appreciate the process of creating, administrating and executing “work” but to decompress a bit I like to watch documentaries, mixed martial arts, recharge by listening to good soul/funk or DNA repair sounds (ancient solfeggio scale) to recenter, enjoy the company of the opposite sex and meditation.
Finish the following sentences:
The most powerful thing about creativity is ...
The inspiration itself to create and execute a creation to the finish.
The most dangerous thing about creativity is …
Not executing on the inspiration to create. Then there’s not being politically or morally correct by creating something that is simply about free self-expression.
For Hollywood to thrive, it needs more …

Good, compelling stories representing the past and the future.

The next screening for FunkJazz Kafé: Diary of a Decade (The Story of a Movement) is in Atlanta on Wednesday, Feb. 22 at The Plaza Theater.

More About The Film: http://funkjazzkafe.com/diary-of-a-decade-movie