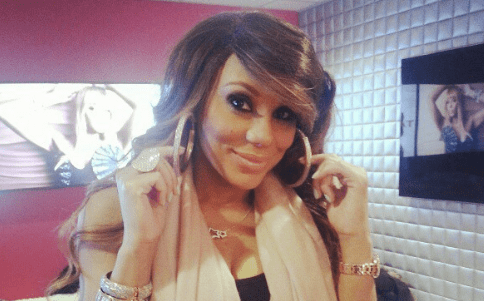 Reginae Carter has once again inserted herself into  grown folks’ business. Lil Wayne and Toya Wright’s daughter who previously blasted rapper T.I. because of his beef with father Weezy over his comments about the Black Lives Movement, has now wedged her way into mother Wright’s issues with Tamar Braxton.

After Braxton derisively called Wright “Paperback Toya,” during her public apology to Tameka “Tiny” Harris, Wright’s daughter Reginae Carter sounded off with her own verbal sucker punch at Braxton.

Carter, a “Growing Up Hip Hop: Atlanta” cast member, was shamed by adult Twitter users who believe that she should stay out of grown folks’ squabbles. She has grown up a young lady of privilege because of Lil Wayne’s enormous success in the rap game and may feel entitled to speak her mind — even though Wright should be capable of defending herself against adversaries like Braxton.

Wright penned a lengthy, profane-laced and scorching response to being called out of her name by Braxton. Therefore, Twitter users believe that her daughter Reginae should have bottled up her emotions instead of entering the fray:

Reginae Carter is ANNOYING!!!!!! Your parents can proudly defend themselves.

Other social media users believe that Carter had every right to defend her mother. Take a look at the debate play out on Twitter:

Stop trying to keep up with someone you just don’t compare to … it’s pointless ??‍♀️

Sooo if someone comes for you parents, you not going to defend them? Sorry don’t see Reginae in the wrong for defending her mom. pic.twitter.com/m30zqD53Rk