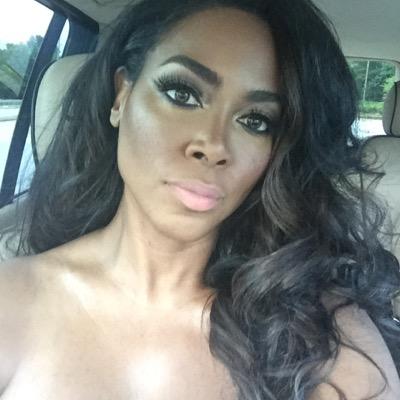 Kenya Moore of the “Real Housewives of Atlanta” pulled a fast one on her employer, Bravo TV, when she went off and got secretly married in the Caribbean this past weekend.

Moore has corroborated what had been speculated that she’s a happily married woman. As previously reported, photos were leaked this week of her reportedly tying the knot on a beach in St. Lucia. And now Kenya’s confirming that they were indeed the real deal.

Not only is Moore married, she’s found “the love of her life” in a businessman she met in 2016.

According to People magazine:

The 46-year-old Real Housewives of Atlanta star twirled down the aisle last weekend, in an intimate beach getaway in St. Lucia surrounded by family and friends, PEOPLE can exclusively confirm.

Her husband — a businessman she first met a year ago and began dating a few months later — is choosing to stay out of the spotlight for now, his identity is being kept private from the press.

“I’m just ecstatic,” the star tells PEOPLE. “This man is the love of my life and I’m so happy to begin our lives together as husband and wife.”

“RHOA” cameras were not rolling for the wedding and there are reports swirling that producers are BIG mad that she kept her nuptials a secret.

Despite a relatively quiet season nine on “RHOA,” Moore is arguably the most provocative cast member on the hit Bravo TV reality show. Originally from Detroit, the former psychology major left Michigan with the determination to build her own unique brand. Well known for being crowned Miss USA, Moore enjoys writing, traveling, hitting the gym, and never passes up an opportunity to speak her mind.

With the recent launch of her hair care line, Moore Hair Care, and the continuous development of her production company, Moore Vision Media, she remains busier than ever. Moore is preparing to take her hair care line into retail stores and is excited about this exciting next phase.