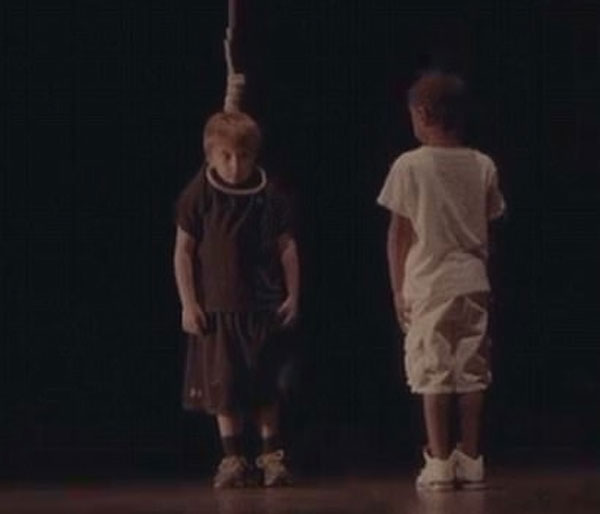 Social media is on fire after Florida based rapper XXXTentacion, whose real name is Jahseh Dwayne Onfroy, 19, posted a new music video this week that many are calling tasteless. The video titled “Look at Me,” which was written and directed by the rapper, opens with a violent act against a White teacher in a classroom of disruptive youth. It then goes on to show imagery of men hung from trees that include XXXTentacion dangling from a noose and rapping about racial violence. XXXTentacion raps the names of Emmett Till, Philando Castile, and Heather Heyer, all individuals who lost their lives due to racial violence. There is a reenactment of each person’s death, including the beating of Rodney King by police. There’s one scene in the 5-minute video that has many people up in arms for its graphic nature.

It features two children, one White and one Black, led by XXXTentacion onto a stage where a noose is suspended. The White child has the noose placed around his neck and is lynched by XXXTentacion in front of an audience. The child’s feet are twitching as he is lifted into the air. The scene ends and XXXTentacion comments without music on the nature of violence and White supremacy. Many were upset by the rapper’s use of a child to make a point about racism, asking if he’d gone too far with his artistic expression. This was expressed on Twitter:

If a white artist placed a black child in a noose, automatic age restriction & de-monetization.