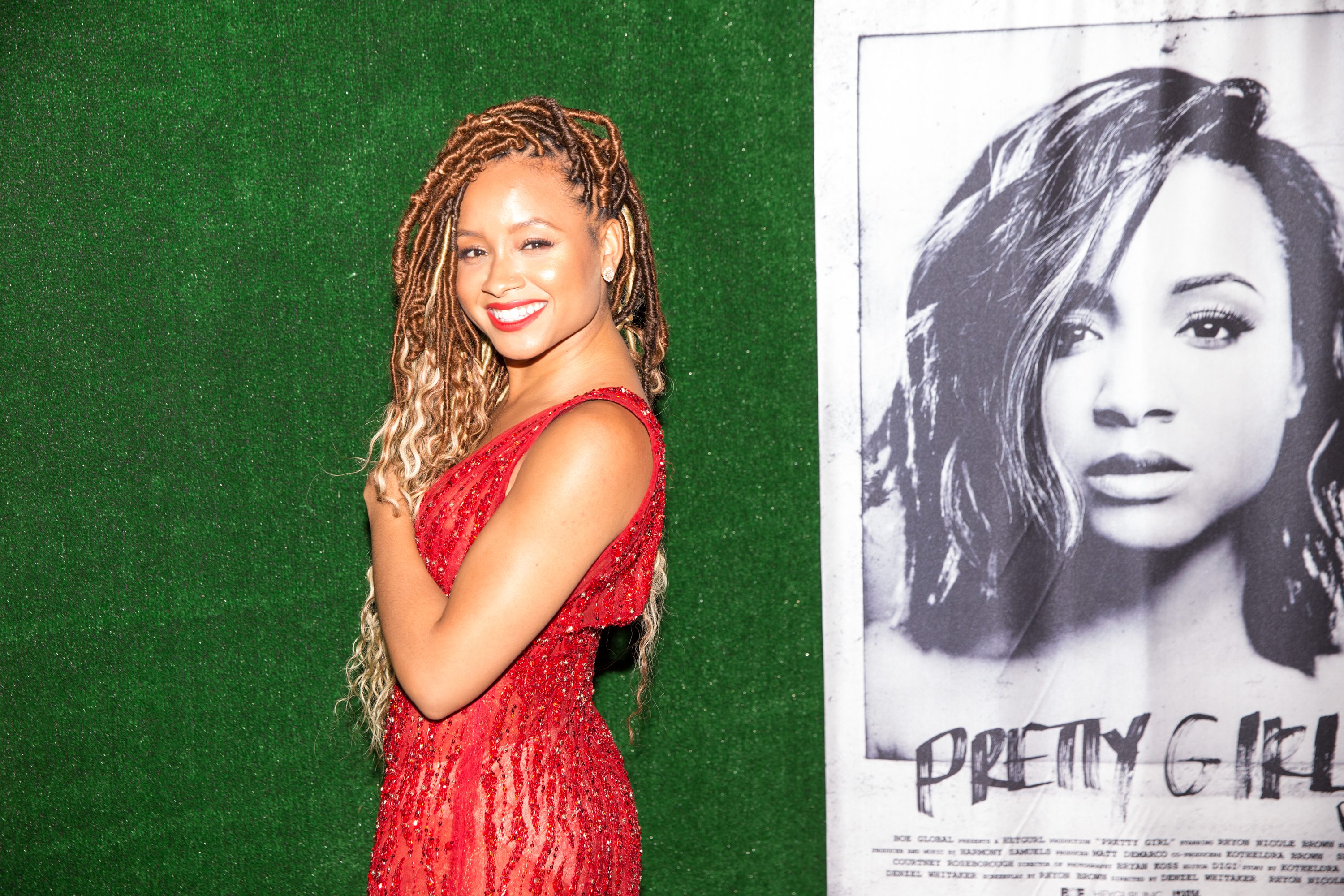 Rhyon Brown at her Pretty Girl screening at The Know Contemporary in Los Angeles. Photos courtesy of Jose Cardoza

Rhyon Brown fell in love with creating music in a college dorm room. Brown began acting at the age of 5. Though her love affair with music began long before college, it wasn’t until her friends at the University of Southern California encouraged her to pursue music seriously that she realized she could pursue both music and acting. Fast-forward five years later, Brown is set to release her debut album, “Pretty Girl”, and its accompanying visual of the same name, next month.

The album may be the 24-year-old’s first, but it’s been a long time coming. A California native, Brown grew up on a diverse musical diet ranging from Billie Holiday to Indie Arie to gospel heavyweights like Kurt Carr.  After graduating from USC, Brown hit the ground running nabbing lead roles in feature films like Surviving Compton and  Irv Gotti’s series “Tales” on BET. Prior to her four-year acting hiatus, Brown starred in television series such as “That’s So Raven,” “Lincoln Heights,” and in 50 Cent’s Get Rich or Die Tryin’.

Now a graduate of USC, Brown is poised to become a powerhouse in both music and film. Rolling out sat down with Brown to talk Pretty Girl and what’s next for her behind and in front of the camera.

Tell us about your new album and short film Pretty Girl.

I’m really proud of the music. I think that the film came out better than I could have ever imagined. [This project] is my vehicle to start a movement. The reason that I named the album Pretty Girl, and the movie as well, is because I want women to start viewing themselves differently and to know that their true beauty is inside. I’m trying to provide women with another option because I think that as women when we choose to respect ourselves and we find beauty in what we call our struggle and realize that’s what defines us,  I think that men will start treating women differently as well. I want to give women the opportunity to join that movement musically.

What can we expect to hear and feel from the album itself?

My album is really an emotional journey. I worked with an incredible producer by the name of Harmony Samuels [Ariana Grande, Fifth Harmony]. I’m signed to his production company, BOE, and I was able to walk into his studio and tell him that I don’t really know what it is I want my sound to be but I do have an idea of what I want to say. I needed somebody that believed in my drive and my talent enough to really work with me in finding what that sound was. When I tell you Harmony is just this incredible mastermind when it comes to music. It’s a fusion between R&B and pop but I grew up listening to a lot of soul singers so there’s a little bit of soul in my voice over the track. Again, it’s an emotional journey. I really wanted to take people through the four years that I was absent from the industry and tell them what my hardships were and how I grew as a person. My hope is that it’s so relatable to people that they feel free enough to express what their struggles are and really fun times.

Are there any other features or collaborations on the album that you’re really excited about?

You know it’s crazy that you ask me that. We actually attacked this album with a lot of confidence and wanting to kind of have a piece of work nobody else could take credit for so we chose to go without any features at first. I’m a big 90s music baby and Harmony’s a fan of 90s music as well, so we have like a lot of samples, a Jade sample in there and a sample from a Teddy Riley record. Teddy Riley actually heard my song, and we asked him to get on it so Teddy Riley is the one and only feature.

What song from your album would you choose to introduce yourself as an artist to the world?

This is a trick question! My single actually comes out to today, “Gone,” it’s going to introduce me as an artist. People will get the emotion from me that I feel is so important. I think a part of what makes me the singer that I am is because I have the acting background [and] I am able to convey what I am feeling through the way that I sing the words.

Speaking of acting, congrats on your role on this season of “Tales.” Any other acting projects coming up?

Yes, there’s another project that I am up for currently that I can’t really talk about yet. I did just do “Tales,” [it was] a phenomenal experience. I got to work with Tasha Smith, who is this incredible director and actress as most people know her. Irv is awesome. I actually had a conversation while I was out there with Irv and he said he would let me direct an episode next season so I’m pretty excited about that.

While completing your film degree, you directed a number of projects including RaVaughn’s “Best Friend” music video for Columbia Records. Is directing your ultimate goal?

My ultimate goal, as cliche as this is going to sound, is to be one of the best entertainers that have ever done it, so I will definitely be directing more. One of my mentors by the name of Jen Cook, who directed me in Surviving Compton, where I played Michel’le, recently told me that she would help produce and fund my next film so that is in the works amongst a lot of other things.

Brown’s album and film Pretty Girl will be released on her 25th birthday, Oct. 6. To stay updated, follow Rhyon at @rhyonbrown on Twitter, @rhyonbrown on Instagram, Rhyon on YouTube and Rhyon Brown on SoundCloud. 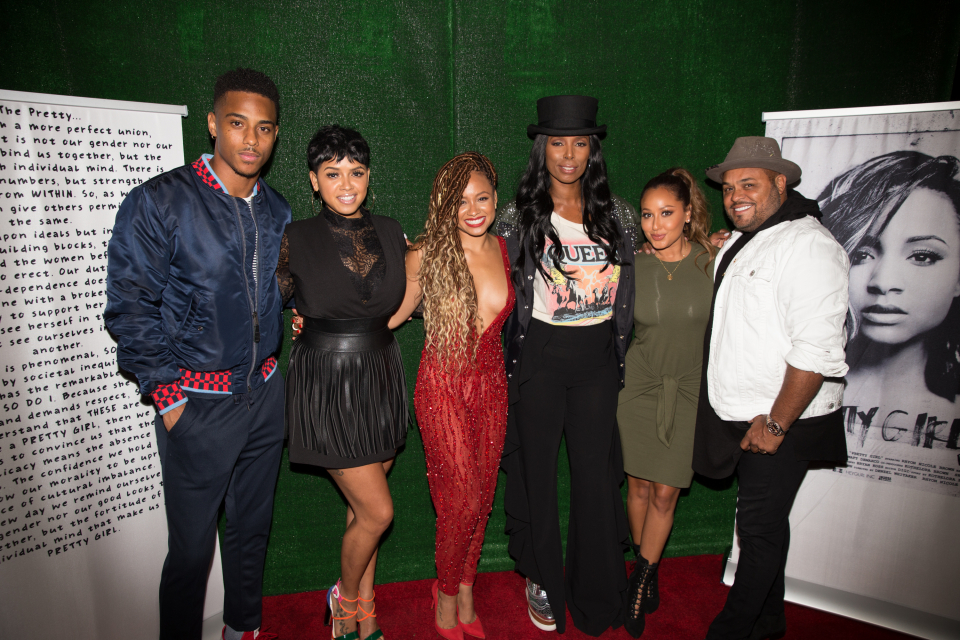