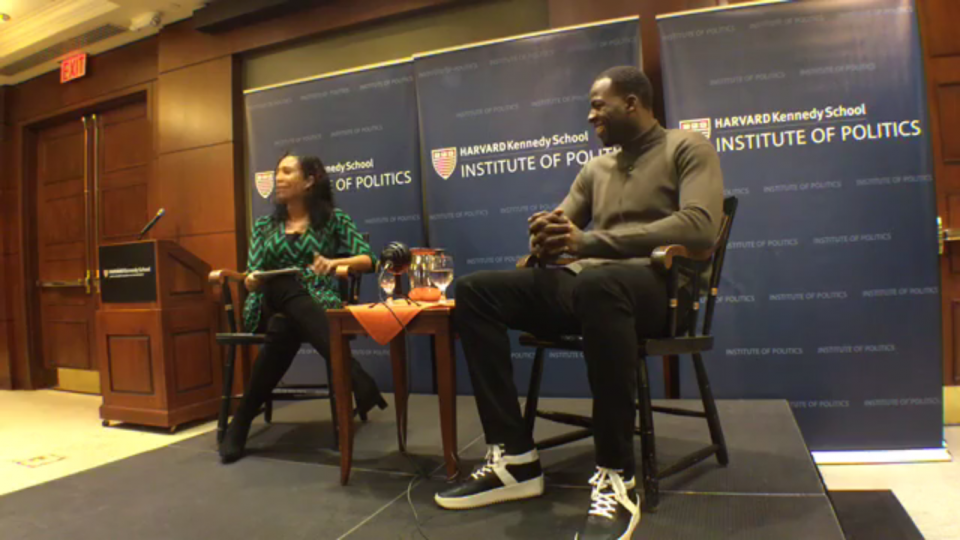 Photo via Institute of Politics at Harvard Kennedy School | Facebook

Golden State Warriors forward Draymond Green has become a star and it’s not solely due to his play on the court. Green’s outspoken personality draws people in whenever he speaks, so much so that he filled up a room at the Harvard Kennedy School Institute of Politics to discuss politics and sports.

A few weeks ago Green posted on Instagram what he thought of the Bob McNair situation, calling his Houston Texans players his “prisoners,” Green didn’t hold back on what he believes is the problem with McNair’s statement.

“For starters, let’s stop using the word owner and maybe use the word chairman,” Green wrote in the caption. “To be owned by someone just sets a bad precedent to start. It sets the wrong tone. It gives one the wrong mindset. Webster states that an inmate is a person confined to an institution such as a prison or hospital. Not sure these tax-paying men should be referred to as inmates — but what do I know?”

“For him to try to turn it into something it’s not is wrong,” Cuban said to ESPN. “He owes the NBA an apology. I think he does, because to try to create some connotation that owning equity in a company that you busted your a– for is the equivalent of ownership in terms of people, that’s just wrong. That’s just wrong in every which way.”

Cuban continued to explain why he believes there’s a misconception about owners in professional sports.

“When you look at Mark Cuban for instance, with the whole equity thing and sports. We all can own equity and that’s fine,” Green said. “But Mark Cuban will never know or understand how it feels for me, a young, Black African American to turn on the T.V. and see what happened in Charlottesville. He’ll never have that feeling, so when I say, ‘Hey, maybe we shouldn’t use that word.’ To be honest, I really don’t expect him to know where I’m coming from because he’ll never feel what I feel.”

Green credited a lot of his willingness to educate himself on social issues was thanks to the Warriors’ openness in their locker room to discuss those topics. He also had a response to those that tell people in the sports world to solely focus on games.

“That’s funny,” Green said. “The reason that’s funny is because they say athletes can’t speak on politics. Well, I find that funny because everyone thinks they can speak basketball.”