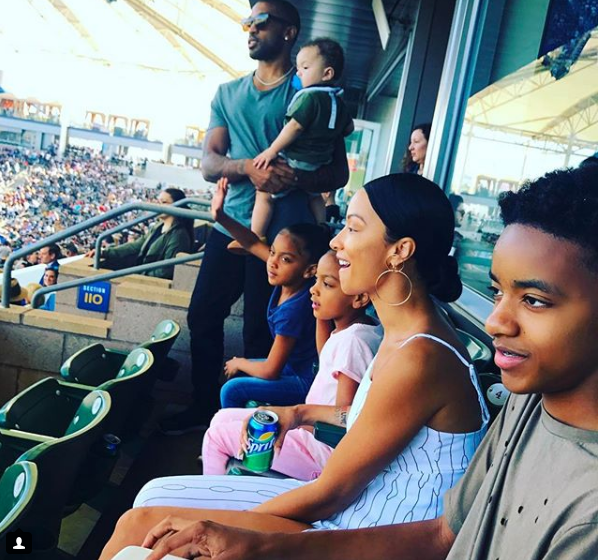 Stripper-turned-reality star Draya Michele has been dragged over the white-hot coals on the regular over the years. Trolls spew their anonymous venom at this woman who often demonstrates the mothering skills of a rodent or predator (rats and tigers are known to eat their young).

The former “Basketball Wives LA” reality star got online and posted a since-deleted post about being sick of hearing about her son’s homework. And how boring it was. And about how she threw a hissy fit and wouldn’t sign a paper so her son lost points on his grade.

Draya had this to say about her son’s homework on Instagram, which got her ripped apart like a chicken wing by a mob of critics. 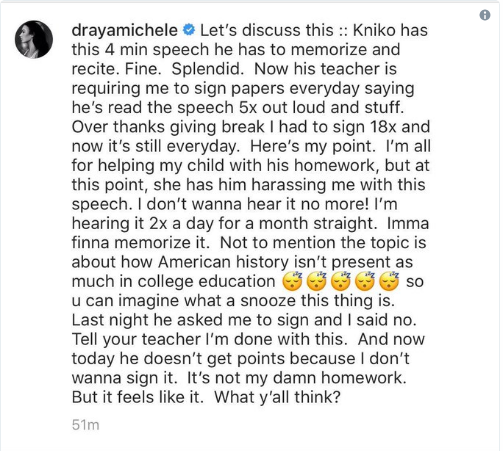 Most reality star watchers realize that Draya was a young mother, having her first kid at 17; the father of that child was incarcerated for 10 years when she was seven months pregnant. Most know that Draya resorted to stripping and leaving her son alone at night in another city so that she could provide for them.

However, listening to a speech and signing a piece of paper seems like a very small thing to do for your child. And the way she goes in on social media about her clothes, her hair, her food — but seems too bothered to just listen to a speech — seems selfish and narcissistic.

There’s the general assumption that parenthood is often defined by tiny, consistent and necessary inconveniences. And in the grand scheme of things, signing a paper or listening to your son rehearse a speech, over and over and over again, are relatively benign interruptions in your life. And it will result in the child getting the grade he needs in school. And it shows that you care about what is important to him or her.

Draya probably loves her kids, but maybe this chin check from the public will be the thing to reassess the fundamentals of parenthood. Maybe it will allow her to realize why people responded to her post so vociferously.

Nevertheless, Twitter and Instagram users pummeled the statuesque beauty into oblivion for her imprudent posting of her maternal shortcomings:

Draya is a perfect example of why you don’t actually impregnate or marry the airhead bottle girl skeezer that has nothing else going for her other than her looks. I hope orlando scandrick is ready. This is the type of bull—- he’s signing up for lmao

Draya’s Son: “Mom can you please help me with this homework…imma fail…”

when draya son start reciting that speech to her pic.twitter.com/HhDORG7YyX

Kniko: Mom can you please sign this, its for a grade
Draya: pic.twitter.com/apO7kOmCJX