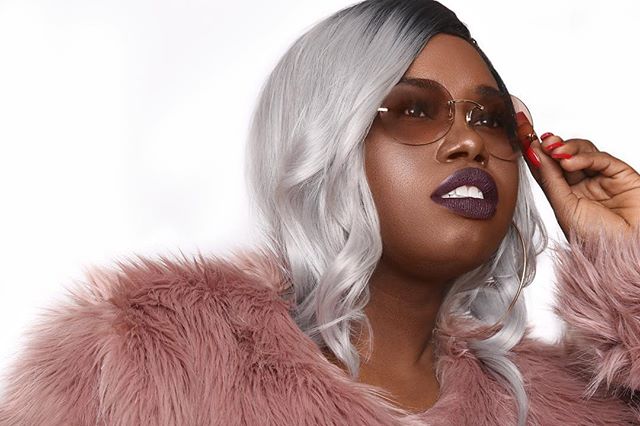 Delo Brown is a Detroit girl at heart. Since starting her comedy career in 2015, she’s branding herself on the comedy scene with her sold-out stand-up shows: “How Funny Can You Get,” “Liveat25,” “What A Time To Be A Bad B—” and “The Blackout.” This mink-wearing, Cartier-framed comedienne is making the city of Detroit laugh and come together one show at a time.

How did your career in comedy begin?
It’s a funny story. I went to 211 Ultra Lounge in Detroit one summer in 2015. I was with my friends, and this is when I first began writing jokes a little bit and I kept everything in my notes on my phone. It was stand-up night and my friend kept pushing me to go on stage and perform. She was like, “I know you got some stuff on your phone so just go up there and do it.” So that’s just what I did. It was cool. It turned out to be a contest and I won second place. I was like oh s—. Ok then! After that, I didn’t touch a mic for a year. I don’t think I was truly ready to dive into comedy just yet. It was a liberating feeling, but it was also scary, and I knew I had to step my confidence game all the way up. A year later, I rented out a venue that held 55 people and threw my first comedy show. The tickets sold out in less than 2 days.

What moment on stage proved that comedy was for you?
It was at my most recent show. During my set, I paused for a second and looked out into the crowd and once I realized that I had the ability to make 400 people laugh… that’s when s— became real. That’s when I knew this is what I wanted to do for the rest of my life. This is my job, my career, my baby and my first love.

Detroit, thank you for another sold out show.

When people see you, they see Detroit style and personality. From where do you draw your comedic concepts?
I love the fact that people recognize the Detroit in me when they see me. That’s what I’m about. That’s where my material and concepts come from. I literally take everything that is happening around me and create a story out of it. A true story nonetheless. Moments from my job, spending time with friends, dating, being newly single, and being a plus size Barbie is what makes everything stick. I’m from Detroit, born and raised and I still live in the hood. I wouldn’t be Delo Brown without Detroit. What story could I tell if I wasn’t from here?

“What A Time To Be A Bad B—,” and “The Blackout.” How did these two events change your life and your career?
These two events took my name to another level. I feel like 2016 was the warm-up for me with my first two shows, “How Funny Can You Get?” and “Liveat25″. It was like, ok Delo…we see you. But then I came through in 2017 and dropped “What A Time” and “The Blackout” and s— took off! People saw my hustle and my work ethic, and they respected it. They peeped I wasn’t letting up.  Nobody is doing what I’m doing, and I say that as humbly as possible. Again, having that power to pull that many people together especially in this city, and give them the opportunity to laugh is life changing. It’s a blessing because I’m constantly reminded of each show that this is exactly what I’m supposed to be doing.

What can we expect next from Delo Brown?
You guys can expect a lot of wonderful things from Delo Brown. I will be in my first improv show on December 23rd, and I will also be opening for Comedian CP on December 30th. More shows, more jokes, more everything! I’m excited to keep going hard for my city. In 2018, I’m taking over and that is a promise.