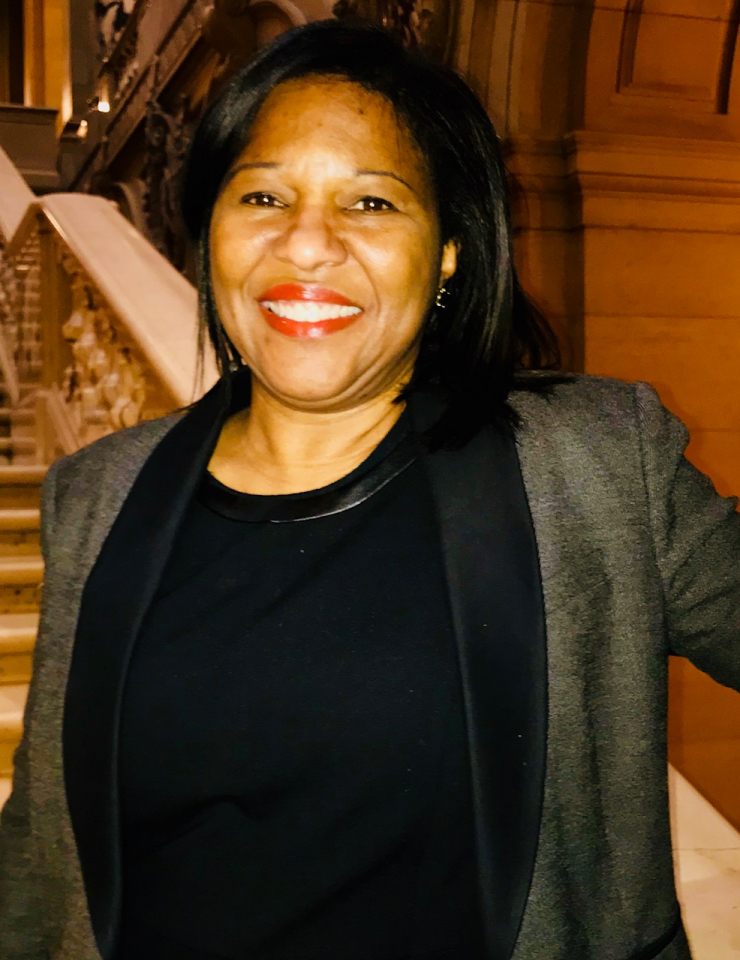 Kimberly Slay-Holmes was a suburban girl who lived in a predominantly white suburb. “My junior high school there were three Blacks. There were 4K in my high school; 930 students my graduating class and only 30 were Black,” states Holmes. College was no different. While attending Drake University, besides “Greek life” there were limited signs of people of color on campus.

There are only a few Historically Black law schools in America. Despite the fact Kimberly Slay-Holmes had never visited the South,  emphatically, she wanted to attend one for so many reasons: to see people of color, succeed, and to find a network who supported one another. Kimberly fared well from her choice. After fifteen years of private practice and the start of a new marriage, her decision placed her in an elite league all her own. Holmes is the general counsel and Deputy Chief of Staff for the governor of Minnesota, making her the only African-American currently holding such a position in the United States. Check out the rest of her story.

Name three things revealing why it is important to attend a Historically Black College or University?
1. You can see how well your peers can excel. I attended Southern University Law School in Baton Rouge Louisiana and I saw my peers excel over and over again. People left Southern and did great things, from magistrates to federal judges and congressmen. All products of a distinguished HBCU Southern University Law School.

2. Support from your peers. Law school is a cutthroat system where all grades are on a curve. The curve makes people not want to share things. But at Southern it was different than what I saw across the street at LSU. We helped each other and we wanted to see each other succeed.

3. HBCUs are like a family. When I left Southern, I kept in touch with my colleagues and classmates all over the country; we have a network.

How did you get to Minnesota from Louisiana?
I was in Baton Rouge for 25 years. I had a private practice for fifteen years. When my current husband and I decided to move to Minneapolis, I wanted to work in-house, do something different. I met with the current general counsel for the governor at that time looking for connections in the city. But in my mind I was thinking, “This is a great job and I would really like to be general counsel for the governor.” She was currently in the role and I didn’t think she would leave anytime soon. I was connected with the governor’s chief of staff, so I got hired as assistant commissioner of law and compliance for the department of revenue, where I was in charge of all tax litigation. I had legal and compliance under me.

How important is it to network?
So, by me working directly with the governor’s office, I kept lines of communication open. I along with another Black commissioner actually met with general counsel and said “If anything ever opens or hiring positions, we are interested in a higher position.” But in the back of my mind, I still wanted to be general counsel. Months later, I got a call from the Governors Chief of Staff who stated, “The governor wants to interview you for the position of general counsel.” He interviewed me and offered me the job on the spot.

Tell me about your current position as general counsel and Deputy Chief of Staff for Governor Mark Dayton?
I am the governor’s lawyer. I advise him on anything that is legal and not legal because I am also his deputy chief of staff. He has a chief of staff and a couple of deputies. So, if there is a policy that might turn into legal I advise him. In addition, all agencies have general counsels, so I work with them to ensure what they are doing aligns with the governor’s objectives. Furthermore, I assist them if they have any litigation issues. For example, if an agency gets sued, I would connect them to the attorney general’s office to make sure they have lawyers. So anything legal the governor is going to pass by me. One thing that is important with my job: I sit as the list line for the judges. There is a commission that makes recommendations as to who should be judges, the governor and myself and two others are on the committee; we interview the finalists for all level: Supreme Court, Court of Appeals and District Court.

How important is diversity?
It is the objective in everything we do. For every position we have available here [at the state], the question is always asked, “Is there a person of color that’s available for this position?” This covers Asian, Latino, African-American, Somalian, and African. When you walk through our office, you will see we are very diverse. I will never forget when I first started working for the state, Governor Dayton walked into a meeting saying, “I need for you all to diversify the state; it is too white in here.” We really started seeing the change once James Burroughs [chief inclusion officer] came on board.

What inspires Kimberly?
To set examples for other lawyers and young people. My law firm had a program where we mentored females. During the summer, we would take three to four high school students who were interested in becoming a lawyer. They would come see what it was like to be in a law firm, and sit in court. The goal was to inspire them to be a lawyer. Right now, there are four who went through our program who are now lawyers.

Favorite restaurant?
Milton’s in Crystal, Minnesota; it is owned by a Black female. I say Milton’s because it was her dream to own a restaurant plus the food is fantastic. My husband knows to have my birthday parties there.

Comfort food?
Popcorn. Movie theater popcorn. I will drive ten miles further from my house to the place that has the best popcorn. That’s probably my favorite food. The best popcorn overall is Garrett’s.