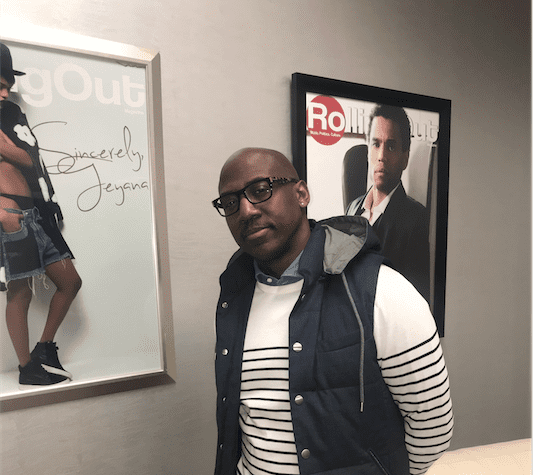 Father, son, and Howard University graduate Craig King is no stranger to the arts. He is a music entrepreneur who has worked with well-known influencers such as Ray Charles, Quincy Jones and Kanye West. Utilizing his skills in music entrepreneurship allowed him to become the founder of Gentle King Technology.

Gentle King Technology is a company that was shaped primarily to be used in the education arena, and getting hardware at a decent price into schools, communities, hospitals, nonprofit and for-profit organizations. Gentle King Technology allows people to white label products and name it after their own companies.

“I stumbled into it, but I don’t like to use the world stumble because I feel like it was a part of my plan. God had it already mapped out for me, but it felt like I was stumbling into it, but really, I was just being faithful and I was trying to be aware in listening to God’s voice,” King said.

Coming from a household where both of his parents were entrepreneurs, King knew that he was bound to be one himself, but he didn’t know doing what. He built his resume as a musician and as a producer. This process allowed him to develop people skills and build a strong database. As a result, King was pulled into tech by some friends in China and then realized his calling would transfer into tech because of the great relationships and trust that he had built.

“A lot of people believed in me and they trusted my word. The trust was there when I came into the tech space. I told a few friends this is what I’m doing and they 100 percent bought in. They saw the product, they saw the price points, they saw the business model, and the rest is history,” he said.

King is a community tech activist and stresses that the motive for everything he does is solely for the community and to make a difference. King feels that tech is an industry where he can do major things because, at the core, he knows he’s helping people, and impacting his community in a positive way.

“Tech is agnostic, so it can go anywhere and anyone can benefit from it. If I can teach my brothers and sisters how to monetize their business models and make much more money than what they have already built, through tech, absolutely because I’m going to speak in shorthand of that community. I know that they know that I am talking directly to the culture,” King said.

“It’s a really good time for us. [Black Panther], the movie was a tech movie. It was done on a green screen, the whole thing almost. The whole thing is a fantasy. They sold it to us through the principle of tech. They took us someplace that we have not physiologically gone before, but look at the residual effect of it. You can create an entire universe through tech. Wakanda, where is that? It’s nowhere. But it feels like it’s somewhere I wanna go because of what tech does. I am very proud to be a member of a community that allows people to dream bigger and create opportunities they would’ve never had in their lives.

“Building digital communities enable people to be empowered, but also make money off their own culture, peer to peer. We’re building them for all types of people because at the end of the day if you can monetize that and not solely rely on brick and mortar, and the bodies that walk in the door, then we just won,” he said.

From making apps, creating tablets, digitized books, technology events — Grant King Technology does it all. The best thing about the company is that it’s open to all mediums — artists, schools, nail techs, restaurants, hair salons, and any other medium you can think of.

“We’re like an all-star team. We know that we all have special gifts, kind of like X-Men. I can get us in any room or any audience because of my background in arts, but it’s our job to collectively sale the product, to build the platform.

“Our children are going to be a part of all this. Today we’re looking at technology like it’s a big deal, tomorrow our kids are going to be like that’s a given,” King said.

King believes it is important to have conversations about technology in our schools.

For those who aspire to a career in tech, King says, “Look at the market, see what’s missing. It may already exist. Take that thing that exists, and put into a different community. If it doesn’t exist, get into an accelerated group and find a way to build it out, then sell it back to the community.