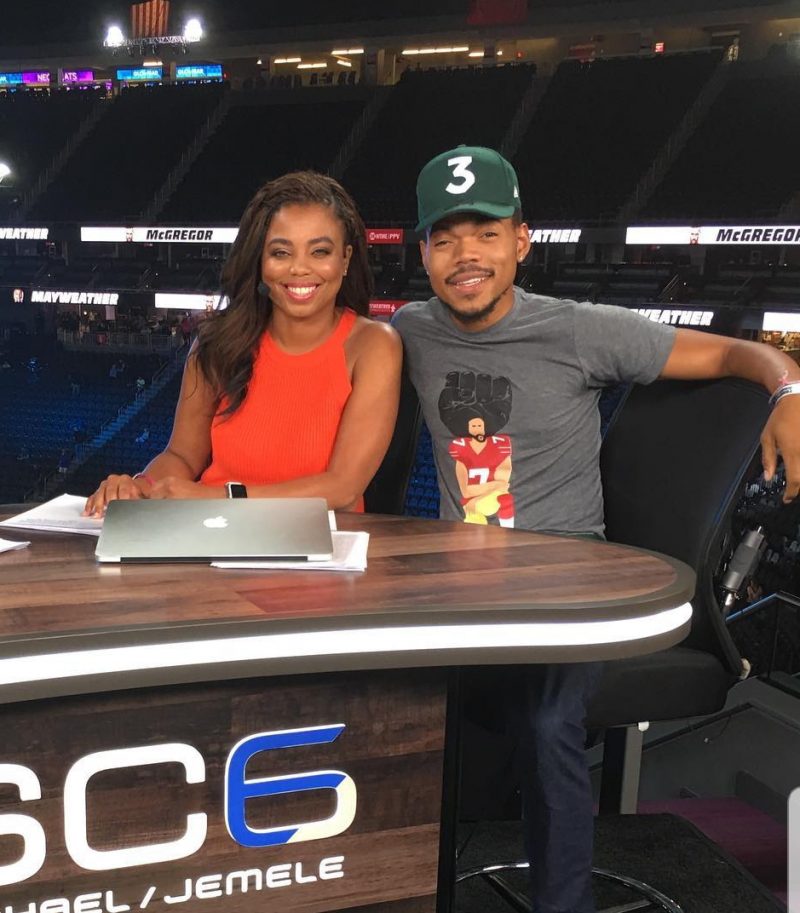 Jemele Hill isn’t your average talking head. The ex-ESPN “SportsCenter” co-anchor blends the lines of sports and politics with ease, is a culture creator, and a successful sports journalist who isn’t afraid to speak out against social injustice.

Since hosting an Emmy Award-winning town hall with former President Obama, Hill has been living her best life as the National Association of Black Journalists’ 2018 Journalist of the Year. After the NFL boycott backlash and outrage from Trump’s White House, some would say her superpower is overcoming adversity.

Essence named you one of the Top 100 Woke Black Women and T.I. saluted you for being a rebel and a trailblazer. How important is being outspoken while standing up for what you believe in and being true to yourself?

It’s who I’ve always been. I didn’t learn to be outspoken. Learning to be outspoken suggests that it can be taught. I was always one of those people that didn’t speak about everything, but what I did choose to speak out about, I really cared about so it was taken with a higher level of seriousness. It feels as natural to me as breathing.

You can’t have true growth without making yourself uncomfortable. [It’s how you] figure out what you’re made of. I’m always learning and evolving. Whatever new thing I’m learning to do, I’m going to suck at it for a little while, but I’d rather suck at something than to never have tried it at all.

Looking back on last year, what are some unpublicized hardships you’ve faced after the Trump controversy and voluntarily leaving ESPN’s “SportsCenter”?

For me, it was the collateral damage [the Trump/NFL controversy] had on what we were trying to build on “SportsCenter.”  It wasn’t why Mike and I chose to leave “SportsCenter.” I wish we could have left on a higher note [instead of with] this perception that we were failures. I don’t think I’ve ever failed at anything [in this business]. The fact that it’s the narrative of our time there makes my blood boil. Having to live with that narrative is always going to rub me the wrong way.

How did you manage to overcome despite your hardships?

It helps to have a good support system. I have a great family and friends that keep me sane and grounded. Someone once told me that you’re never as bad as you think. I try to look at no matter what is said about me, it’s usually by the people that aren’t a part of my life.

There’s a rumor floating around that you’re going to leave ESPN. Is there any truth to that?

No. I have unfinished business at ESPN. ESPN knows about my desires [outside of] ESPN and sports journalism. Me and my best friend from college started a production company called Lodge Freeway Media last August. We want to write scripted and unscripted content for TV and movies. There are a lot of avenues for women of color and we want to make sure we are in the mix of that.

What was the most amazing part of being honored with a renaming ceremony for your high school alma mater’s auditorium?

Reconnecting with some of my old teachers meant the world to me. They gave me the foundation to go beyond Mumford. To have them all back together made the experience even better. I can feel the sense of pride they had in me [and] that made me feel good about making good on their investment in me.

Out of all the accolades you received recently, which one impacted you the most?

Winning Journalist of the Year. I could never have written a scenario where I’d be receiving this award in my hometown [after] joining NABJ the last time the conference was in Detroit. It’s the perfect full circle moment for me. There are so many incredible journalists who have received this honor from Roland Martin and April Ryan to Soledad O’Brien. While winning an Emmy was special, I value this more because of the depth of the personal connection involved.

If you could give your younger self one piece of encouraging advice, what would it be?

I would have told my younger self to walk in boldness. Don’t limit yourself to anything. It wasn’t until I started to experience things in adulthood that I realized how much I had limited myself. If I could go back and do it all over again, there are a number of things I’d do and experience.

Since your recent cameo on season two of Marvel’s “Luke Cage,” what do you consider your superpower to be?

My authenticity. You have to choose a superpower that isn’t going to fade or be controlled by anyone else. I’ve always felt comfortable in my own skin. There are people who have to work at being themselves and it’s something I’ve never had to work at. It’s only gotten stronger as I’ve gotten older. I love that it comes naturally to me.

What superpowers do you think all Black women have?

Selflessness. We have to endure a lot and often at our own expense. We have shown our willingness to sacrifice for the greater good even if that includes ourselves. Our trauma has never really been the priority in our community. Giving selflessly [while] knowing that has never stopped our outpouring of unconditional love.

Why is it important for seasoned and experienced Black women to reach back and help younger women of color?

Black women have so few safe spaces. It’s important for Black women to provide that for each other especially for young Black women. They are living in a time where they are exposed to so much and are under attack. They need to know they have big sisters to lean on. We have to give this next generation of Black women a sense of belonging.