Scores of celebrities and notable public figures from across the nation came out to honor music legend Janet Jackson, who was being honored with the BMI Icon award and celebrated for her stellar career as one of the most groundbreaking and influential entertainers of all time. They included Atlanta Mayor Keisha Lance Bottoms, Georgia Democratic gubernatorial hopeful Stacey Abrams,  Ludacris, Teyana Taylor, Keri Hilson and many others.

The ceremony opened with gospel singer Tamela Mann paying tribute to the “Queen of Soul” Aretha Franklin by singing a rendition of “Precious Lord, Take My Hand” followed by “You’ve Got A Friend.”

After her performance, the Social Star Award was presented to Atlanta rapper Derez De’Shon. The award recognizes a millennial artist for using their social media platforms to broadcast their music. De’Shon also wowed the crowd with a performance of his hit song “Hardaway.

Shortly after his performance, BMI Vice President Catherine Brewton and lifestyle specialist Kenny Burns honored the songwriters and producers of the top 35 R&B and hip-hop songs from across the nation.

Metro Boomin, 24, was named producer of the year for the third year in a row and also took home the Songwriter of the Year Award. He has produced music from some of the hottest rappers in the game, including the Migos, Big Sean, Kodak Black, Future, and 21 Savage. While accepting his award, Metro Boomin said, “I just want to thank God and my momma.” 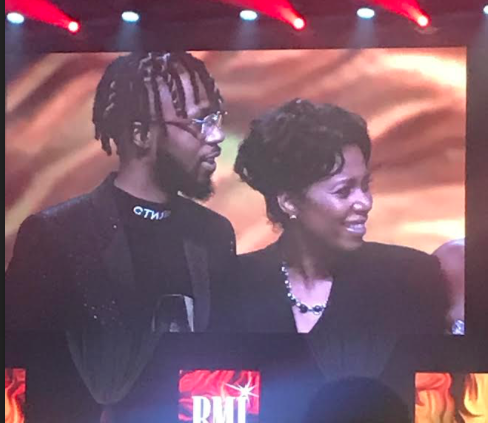 Pop star Ciara introduced a stirring tribute to Jackson, which included a high-energy routine presented by a group of young dancers from Dance411 Studios and choreographed by Sean Bankhead, who has worked on routines with Jackson. Other performers included H.E.R., Jussie Smollett, Justine Skye, Normani, and closing with Teyana Taylor.

Janet’s close friend and well-known icon, Missy Elliott made a surprise appearance and spoke about Janet Jackson before presenting her award.

Holding the award, an emotional Jackson said, “I’ve been honored so many times, and I’m so thankful, but this tribute, I’ve never seen anything like it. First of all, I thank my sister, Cee, for starting it all off, for H.E.R., Justine, Normani, Jussie, Teyanna, for all the kids that danced. It really bought me to tears.

“This has been the most beautiful tribute I have ever seen.”