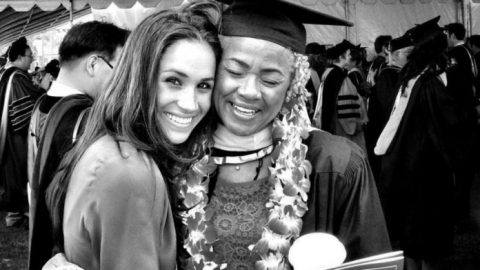 The “White side” of Meghan Markle‘s family are the ones keeping up mess and embarrassing The Duchess of Sussex.

Markle’s half-sister Samantha, 53, created an international scene when she demanded entry at Kensington Palace to see about Markle and was refused by the palace guards. She also went on a tirade about Markle’s mother, Dorian, who is African American, on social media, according to the Daily Mail.

It is important to note that Samantha Markle used to be referred to by her maiden name, Samantha Grant, until half-sister Meghan Markle, 37, married Prince Harry back in May and became British royalty.

“The world does not know that our dad raised her most of the time without the input of her mother especially from age 12 through high school and he gave her everything she had and is,” Samantha Markle said in the tweets. “She was never raised as an only child. Truth kids! He is amazing and successful and mags lie.”

Samantha Markle was not finished with her denunciation of her step-mother. “Glad you love people you don’t even know. But everything that you think you know from tabloids is a lie. Dad pretty much raised her most of her life on his own and Doria was not around very much.”

Samantha Markle then aimed her ire at her half-sister.

“She has ghosted both sides of the family. … You don’t crap on an entire family and then run around crying that you cannot trust everyone,” Samantha Markle wrote according to the Daily Mail.

To exacerbate an already embarrassing and volatile situation, Samantha Markle took a plane from Florida to London and arrived at Kensington Palace this past weekend.

Samantha Markle, who uses a wheelchair, became embroiled in “an embarrassing standoff with police guarding the gates of Kensington Palace,” according to The Mirror.

Markle was permitted to hand a letter to the security guard and warned the guard that her temper would “escalate” lest she was given an audience with her half-sister. The woman also purchased souvenir masks for Prince Harry and Meghan Markle at a sovereign shop.