Since you wanna talk about me

And as if that wasn’t enough, Cardi also slammed Nicki for these alleged transgressions:

After absorbing Cardi B’s combination blows on Instagram, Nicki Minaj came out in the next round with her own power punches on Twitter: 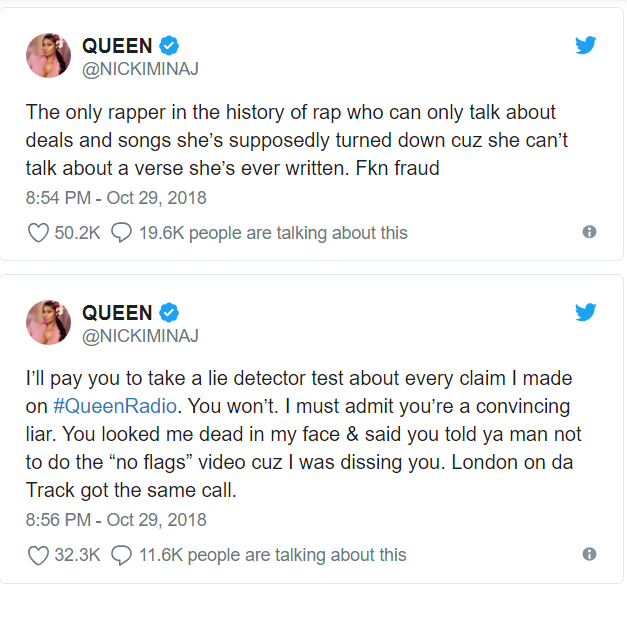 Get on live & have the convo for the world to see.

Do a lie detector test TOGETHER

Do an interview on #QueenRadio 😅

*** ORRR we can both sit in a room together, hear a beat for the first time, and have ourselves FILMED WRITING TO IT!!!!!! #DipVIDEO OUT NOW 👅

After tweeting about Cardi multiple times, Nicki’s tank was was apparently empty. She then tweeted that she wants to now avoid the negativity:

“I know this stuff is entertaining & funny to a lot of people but I won’t be discussing this nonsense anymore,” she wrote.

Cardi got the last shot in and responded on IG with the following: “Alright then! Let’s keep it positive and keep it pushing!”

@Nickiminaj alright then! Let’s keep it positive and keep it pushing!

Whew! Our heads hurt. What do you make of this latest round of small arms verbal fire?