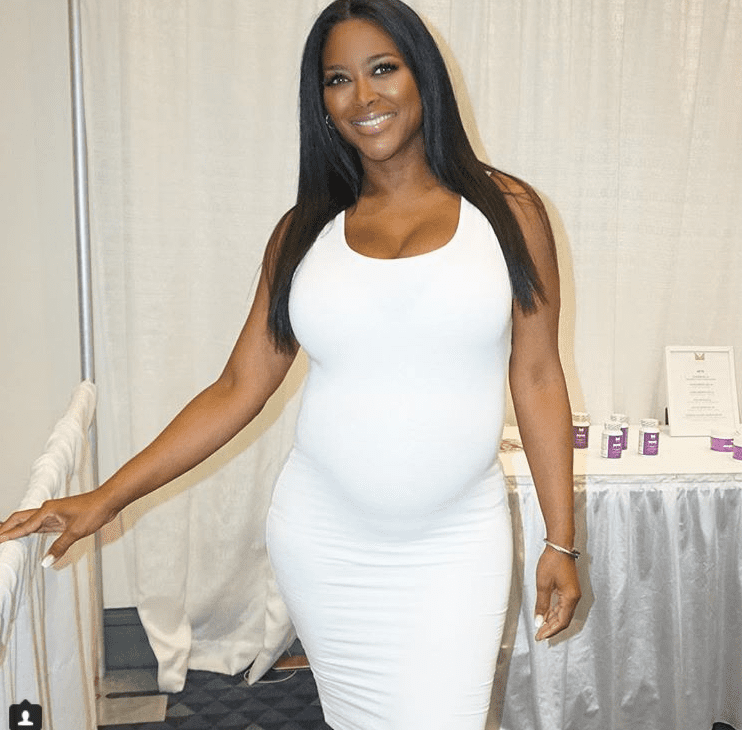 Despite being unceremoniously and conspicuously kicked off the popular “Real Housewives of Atlanta” show, Kenya Moore managed to wiggle her very pregnant self back on camera for this upcoming season.

As rolling out reportedly previously, Moore had her peach snatched from her after the season 10 reunion, reportedly for not allowing Bravo cameras to film her marriage to Marc Daly in 2017.

At the urging of former fellow cast mates Kandi Burruss and Cynthia Bailey, Moore recently showed up during a taped event.

“Well, she does pop up. She does pop up once, to my begging, of course,” Burruss told Entertainment Tonight. “I was probably one of the most disappointed out of everybody that she wasn’t going to be with us this year, but I feel like it was great for her to be able to enjoy her pregnancy and not go back and forth with people and all of that stuff, so it’s great for her to have a healthy pregnancy.”

Pump the brakes, Moore fans. Despite this one cameo appearance, the talk of Moore’s “return” to RHOA has been vastly exaggerated. In fact, this one pop-up appearance is her only one of the entire season.

Burruss reportedly begged Moore to pop in at Bailey’s event in order to give Moore some much-need and desperately-wanted camera shine since she is no longer a part of the show.

According to Straight from the A, the Bravo production team had no clue that Moore would pop in on the show’s taping. The entertainment publication added that Moore was given a mic and she had to sign a release form as any other guest would have to. But she is not back and she was not paid for her brief TV time.

It was just a situation of a friend aiding a friend who was not at the top of her game. “I just was like, ‘Kenya, people have to see you at least once,’” Burruss told ‘ET.’ “So, I kinda twisted her arm.”

This is not to say that Moore is in permanent exile from the show. There is hope for Moore fans that she will return the following season since her personal dramas make for good TV and high ratings.

“I feel like the Bravo family wouldn’t mind her being back,” Burruss added in her interview with ET. “Everything happens for a reason. This was a time she needed to focus on her baby and being healthy. For me, that’s why things happened the way they happened.”

What do you think, RHOA fans? Would you like to see Moore back in the mix? And do you feel she deserved to be fired in the first place?