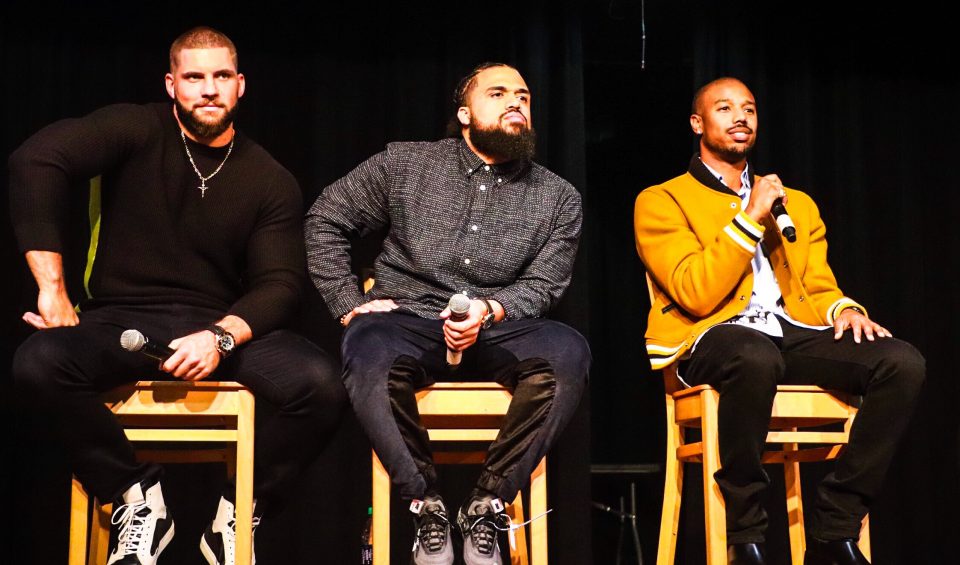 As the release date of Creed II approaches, the film’s star, Michael B. Jordan, his castmate Florian Munteanu and director Steven Caple Jr. met with students at Clark Atlanta University during a stop in Atlanta to promote the movie.

On Nov. 8, 2018, Clark Atlanta University professor Gary Yates hosted a conversation with three and students at the school about what to expect from the highly anticipated sequel to Creed, which was released in 2015.

In Creed II, Jordan’s character, newly crowned light heavyweight champion Adonis Creed, under the tutelage of Rocky Balboa (Sylvester Stallone), prepares to face off against Viktor Drago (played by Munteanu), the son of Ivan Drago, according to movie website IMDb.com.

Without spoiling the movie, the actors and director focused their conversation at Clark AU largely on underlying themes in the new film, such as love and relationships.

Jordan revealed that the major difference between Creed and Creed II is that the sequel is more of a love story. He went into detail about the relationship between his character, Adonis, and Bianca (played by actress Tessa Thompson). He said audience members will get to see how the couple finds a way to compromise regarding each other’s goals and dreams in life without having to compromise their love for each other.

“We haven’t really seen a lot of young Black love on the big screen and on television before. So, we wanted to really dive into that and show what that type of relationship looks like”, Jordan said.

When the host opened the floor for questions from the audience, students asked about the production of the movie, inquired about how to make it in the film industry and sought advice on becoming an aspiring actor.

One student asked Caple to explain the process of bringing a script to life through video. “It depends on what kind of story that you are trying to tell., he said. “I think the best way to tell a story through video is pulling from your personal experience. If you are starting off as a filmmaker and you are trying to figure out who you are, you won’t know that if you try to imitate everyone else. Fail. Do your craft. Work on it.”

Before they left, the administration at Clark Atlanta University awarded each guest with an honorary degree and Jordan took pictures and interacted with the audience before departing.