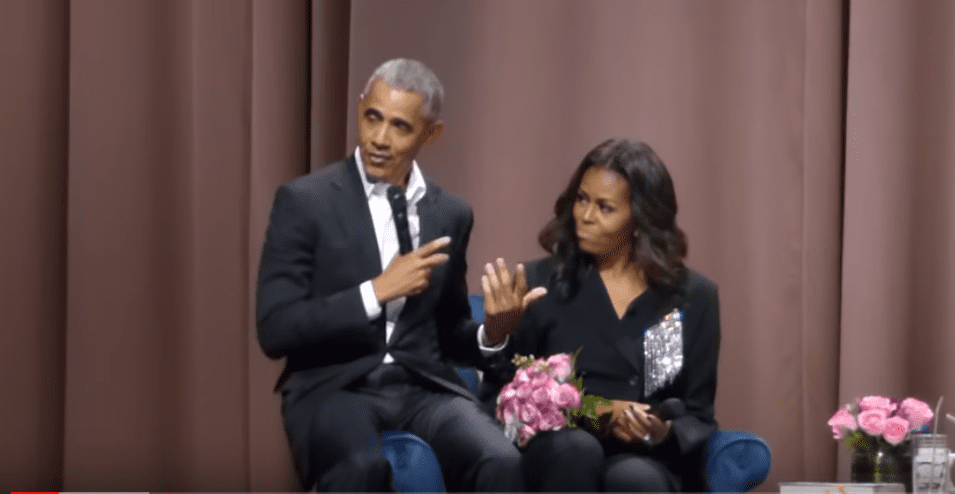 As if the audience couldn’t get enough of one Obama, with former first lady Michelle playing the role of resident rock-star with the best-selling book and sold-out national tour, they got two Obamas for the price of one.

Former President Barack Obama surprised his wife and the audience when he appeared onstage during her talk with former Obama senior adviser Valerie Jarrett, who moderated the book signing stop in Washington. During his 15 minutes onstage with his wife, Barack Obama recapped how he met, dated and fell in love with Michelle Obama more than 25 years ago.

As soon as Barack Obama strutted on stage with his signature swag and a bouquet of flowers, the audience unfurled a roof-rattling standing ovation, replete with ear-piercing screams more befitting of pop royalty Beyonce and Jay-Z.

Speaking of Jay and Bey, Barack Obama compared his entrance to his close friends and supporters.

“This is like – you know when Jay-Z comes out during the Beyoncé concert? … Like, ‘Crazy in Love’?” he said, referring to instances when the rapper appears at his wife’s concerts during performances of her famous song. “It’s the same thing. It’s just a little sample to enhance the concert.”

Before Barack Obama came onstage, Michelle Obama talked about her post-White House life and how she and Barack are able to reminisce for the first time about their historical accomplishments.

“We haven’t had much time to reflect over these eight years because we were so busy doing and so busy trying to be perfect, and to get everything right that rarely did we have time to sit back and acknowledge what we’ve done,” she told Jarrett, according to CNN.

Michelle Obama, 54, admits that sometimes she wishes that her husband Barack, 57, would have spoken out much more frequently and more forcefully against his political enemies while in office.

“There are so many times where I just wanted him — like, I know, all of you — to just curse them out. Just say these things. And he’s like, ‘Well, that’s not the point. You know, the president isn’t the president for his own ego. The president is the president for the entire country. So we have to be very mindful of what we say and how we say it.'”

Michelle Obama also took a subtle jab at Donald Trump when she compared the past two presidential administrations.

Click here to check out the YouTube video of Barack Obama emerging from backstage to ear-piercing screams from the sold out crowd in Washington, followed by a hilarious recap of how Obama met and courted his soon-to-be wife, Michelle Robinson.