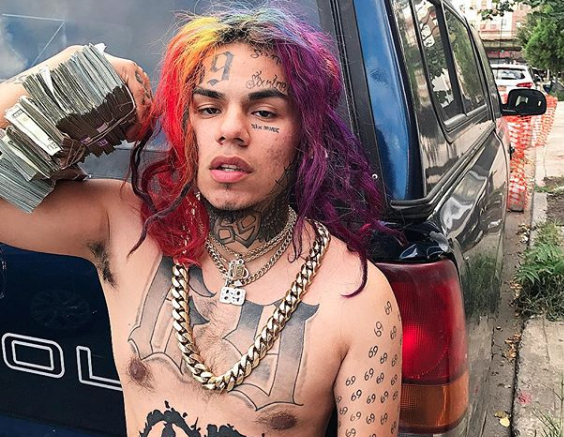 Embattled rapper Tekashi 6ix9ine is reportedly surrounded on all sides — not from his dangerous enemies, but from the feds who say they have irrefutable proof he was involved with several felony crimes.

The 21-year-old rapper has been languishing in a federal jail for more than a month, and now pop culture knows why the judge denied him bail.

Despite the fact that Tekashi has always denied being involved in several unexplained robberies and shootings, the U.S. Department of Justice claims has photos and videos that place Tekashi and his crew at the scene of these crimes, TMZ has learned.

Ironically, some of the videos and photos prosecutors are using to prove their case come from Tekashi’s own phone. The feds believe he recorded these illicit episodes in order to have someone else post them on social media.

Federal prosecutors from the Justice Department told the judge they have more than a dozen images from Tekashi — as well as his ex-manager Kifano “Shotti” Jordan, who also goes by the name of Tr3way — and other crew members during the commission of an armed robbery and shootings. These photos were obtained during a surprise raid at their homes by the Bureau of Alcohol, Tobacco, Firearms and Explosives.

Tekashi’s legal rep denies the Justice Department’s claims against the rapper.  “Daniel Hernandez is innocent and was never part of a criminal enterprise,” says attorney Lance Lazzaro, according to TMZ, referring to Tekashi by his legal name. “He should never have been indicted.”

Incredibly enough, law enforcement officials said they grabbed videos from phones belonging to 6ix9ine and crew members and then compared them with the obtained surveillance videos of an April 3 armed robbery in the borough of Brooklyn in New York City. Prosecutors claim Jordan pulled the robbery. They assert that Tekashi was somewhere close by videotaping the crimes being committed.

There is also the issue of a backpack that allegedly was stolen during that robbery. The ATF said it found that same backpack in Tekashi’s home during the aforementioned raid. TMZ reports they also found an AR-15 assault rifle.

That is why prosecutors urged the judge to deny Tekashi bail, and the judge agreed, insisting it is too dangerous to have the rapper out on the streets.