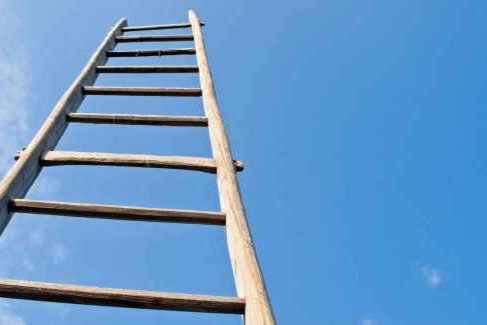 What started off as a joke to mock Donald Trump’s singular obsession with constructing a wall at the U.S.-Mexico border has metamorphosed into a serious effort to “buy ladders” for immigrants to climb over that wall.

A “Ladders to Get Over Trump’s Wall” GoFundMe page has shocked the organizers by raising over $141,000 to provide metaphorical ladders to immigrants.

The GoFundMe campaign was created by Twitter user @HoarseWisperer and Charlotte Clymer as a satirical response to the president, who followed through on his pledge to shut down the government since Congress didn’t cave into his $5 billion demand for a border wall.

Last night, @HoarseWisperer joked about a GoFundMe to buy ladders in response to this border wall nonsense. I laughed but then thought: "Wait, why not?"

This latest fundraising effort was also in response to a GoFundMe page that is attempting to raise more than $1 billion to help No. 45 build his wall. It has raised an impressive $11 million so far. That total, however, is far short of the estimated $25 billion it would take to build the wall along the length of the U.S.-Mexico border, the New York Times reports. Some congressional Democrats say the wall will cost even more than that.

But, for argument’s sake, let’s just say the wall is only $25 billion. As the “Ladders to Get Over Trump’s Wall” organizers pointed out on their GoFundMe page, “even at a rate of $1.7 million daily, it would take their fund about 35 years to raise the $21.7 billion that Trump’s own Dept. of Homeland Security says would be needed to build said wall.(sic)”

The “Ladders to Get Over Trump’s Wall” fundraisers make it clear that their goal is not really about ladders at all.

“We saw some folks are raising money for a border wall to keep out our migrant siblings and fellow human beings, who are fleeing violence and persecution and whose tragically underpaid labor is essential to the U.S. economy,” the GoFundMe page reads.

The organization has no delusions of grandeur to think they can match the funds of the rival GoFundMe effort to build the border wall.

However, the organization is promising that “all funds raised will go to the Refugee and Immigrant Center for Education and Legal Services (RAICES), a Texas-based 501(c)(3) nonprofit agency that promotes justice by providing free and low-cost legal services to underserved immigrant children, families and refugees.”

Grateful to you all who put down your hard earned cash to fund some "ladders" (legal and social services for migrants).

From all at RAICES, huge thank you. https://t.co/EMF2f1Tq7z

RAICES, the largest immigration legal services nonprofit in Texas, has since been added as a fundraiser. After the campaign concludes, RAICES will be able to access the money for legal assistance for immigrants.

“You see, they’ll never reach their goal, but no matter how much we raise, we’re going to reach ours: Supporting an organization working to help immigrants seeking legal asylum. This GoFundMe isn’t really about ladders at all. It’s about lifting people up,” the page reads.

Clymer, an employee with the Human Rights Campaign, told Newsweek she finds the tone of the conversations about the wall “incredibly concerning.”

She added: “The wall is wholly absurd, and the folks supporting it are doing so for the worst reasons. We need to reject White supremacy in our country.”