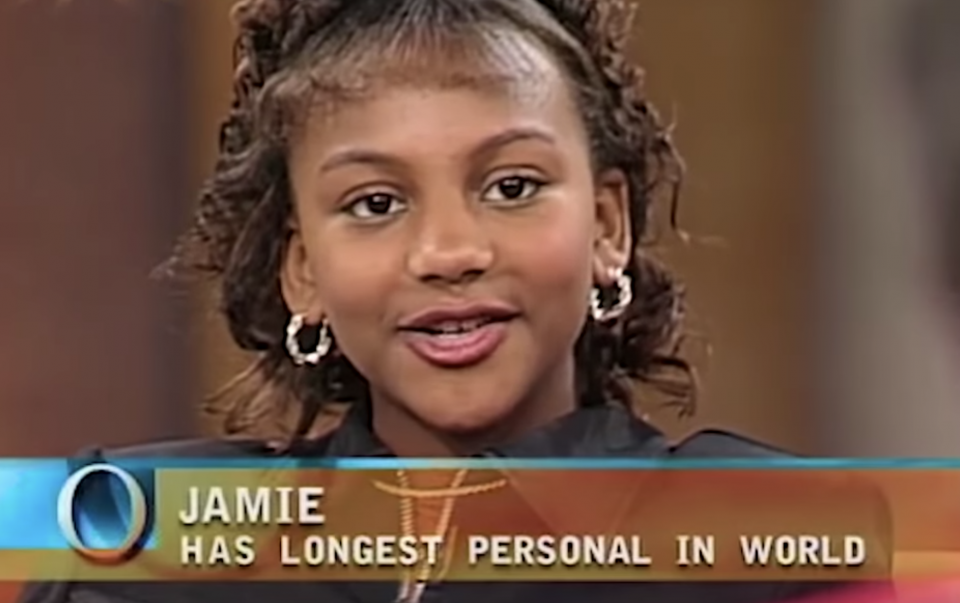 Girl, who in 1997, broke a world record for having with the longest name in the world (Photo: Screenshot from OWN)

In 1997, Oprah featured a young girl, Jamie, on her talk show who held the Guinness World Record for having the longest personal name.

You may be thinking Jamie has only five letters and is a pretty average name. But, in fact, that is the girl’s nickname — an easy substitute for her unbelievably long and unpronounceable name with more than 1,000 letters. Jamie’s birth name is so long that it measures two feet long on her specialized birth certificate.

When introducing Jamie and her mother, Cassandra, on “The Oprah Winfrey Show” in 1997, they had to create a one-of-a-kind graphic to display the young girl’s name on the screen.

Oprah asked the mother the question on everyone’s mind: “What were you thinking?”

The mother responded, ” I had to do something to break a Guinness Book record. I had to make sure that her name was going to be unique. I didn’t want her name to be like anyone else’s.”

Oprah then asked what exactly her name was and how it was pronounced. The young girl took a breath and said her 1,000-plus-letter name without hesitation.

Oprah’s jaw dropped, and the young lady proceeded to say her extremely long middle name and finished with her last name: Williams.

You may be questioning why this relevant today. Well, three days ago, OWN posted the video from the 1997 broadcast on YouTube, and the internet went crazy. The YouTube video has 722,00 views, 19,000 likes, and 4,000 comments.