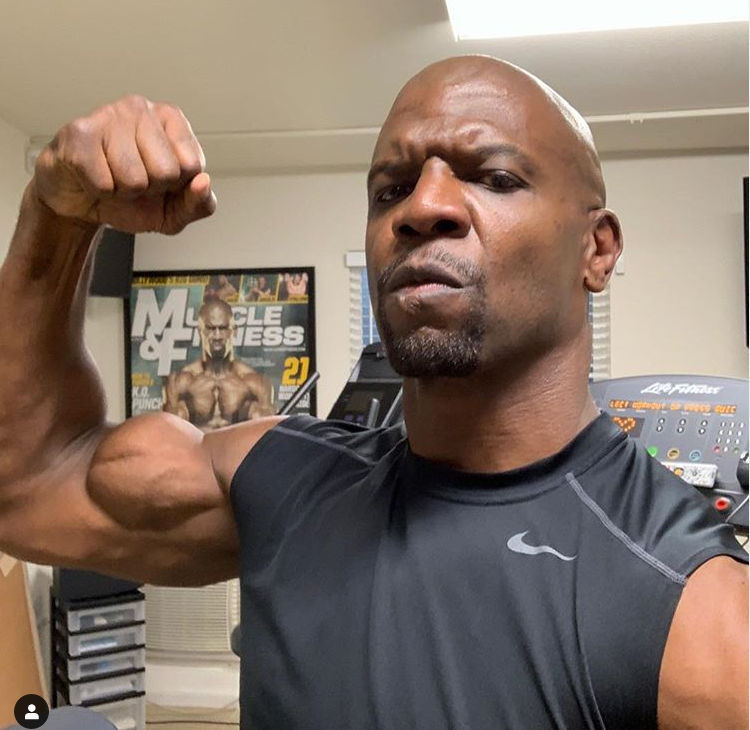 Some entertainers openly wonder how Terry Crews could ever be sexually assaulted. Photo source: Instagram – @terrycrews

Muscle-bound actor Terry Crews is ready to put his giant paws on folks who are bullying him on social media after he disclosed that he was sexually assaulted by his agent. Those in his crosshairs include Tariq Nasheed, 50 Cent and comedian D.L Hughley.

The star of “Brooklyn Nine-Nine” ripped into the “Kings of Comedy” alum in a volley of back-and-forth insults on Twitter.

Crews, 50, asked aggressively if he should smack the taste out of the mouth of Hughley, 55, for mocking him after the famously buffed actor went public with the story of an agent grabbing his reproductive organs — and in front of his wife, no less — at an industry party in 2016.

Hughley, along with a few others, were not very sympathetic to Crews. Hughley said he cannot understand how a man of his massive size could allow a tiny agent to sexually molest him without immediately beating him to a pulp.

Listen to the latest of Hughley’s criticisms of Crews here:

I have looked up to you my whole career as one of the funniest most talented people I’ve ever seen.

I remember when I saw you warming up the crowd at FRESH PRINCE OF BEL AIR and I thought “this man is a genius.”

Crews was not finished.

But now you are an example of when comedy turns to sarcasm and cynicism. And you find it extremely easy to get jokes at someone else expense. You mock my success, but all I ever did was support you.

Crews eventually tweeted Hughley: “If you truly feel that is a correct way to deal with toxic behavior. … Should I slap the s— out of you?”

As you may recall, in February 2016, Crews alleged that Hollywood agent Adam Venit groped his groin twice. In November of 2017, Crews filed a police report, and even though the city attorney of Los Angeles said the statute of limitations had run out, Venit was eventually fired.

In June 2018, Crews testified before the Senate Judiciary Committee on the Sexual Assault Survivors Bill of Rights. Crews spoke to Congress about “the cult of toxic masculinity” after his experience with sexual assault and the damage it has done to his career after he told on the agent.

“Hollywood definitely has been a problem area, simply because so many people view this as a dream. And what happens is, someone has power over these dreams and what happens also is that you get tricked into thinking that this type of behavior is expected, that it’s part of the job, that this harassment, abuse, even rape is part of your job description,” he testified.

“I probably would have been laughed out of the police station,” he said of wanting to immediately press charges but shied away from it. “A year later, once the #MeToo movement took full swing, it was safe to come out. When you are victimized, you are now behind enemy lines and you are trying to find a way out. … You’re trying to find your way to safety. No one around is going to help you. No one is going to believe you.”

Listen to part of Crews’ testimony on Capitol Hill:

WATCH – @terrycrews full opening statement: "I am honored to use my platform and story to help create additional civil rights protections for survivors across the nation under the Sexual Assault #SurvivorsBillofRights."

Crews is currently a host on “America’s Got Talent.”