Actress and activist Alyssa Milano is beside herself. Singer Rihanna denounced Alabamas’ legislature as “idiots.” Lady Gaga calls the decision to outlaw almost all forms of abortion “heinous.”

These are just some of the superstar entertainers who have cried out vociferously against the all-male Alabama Senate voting block that has now criminalized abortions on any level, sans when the woman’s life is in danger. Alabama’s female Governor Kay Ivy signed the bill into law on Wednesday.

Today, I signed into law the Alabama Human Life Protection Act. To the bill’s many supporters, this legislation stands as a powerful testament to Alabamians’ deeply held belief that every life is precious & that every life is a sacred gift from God. https://t.co/DwKJyAjSs8 pic.twitter.com/PIUQip6nmw

Alabama passed the most restrictive abortion bill in the country, shockingly warning that the punishment for doctors performing an abortion may be 99 years in prison. Other states including Georgia, Ohio, Missouri and a dozen others have also passed similar bills, though much less Draconian in nature.

The reported long term goal is to finally have the U.S. Supreme Court finally overturn the Roe vs. Wade decision made by the same court that legalized abortions nationwide back in 1973.

Check out the blazingly-hot reactions from a herd of big-name celebrities, beginning with Ms. Robyn Fenty on Twitter: 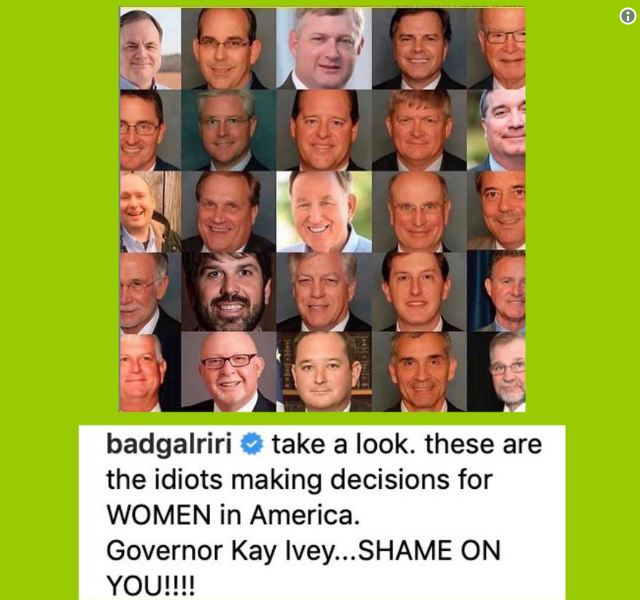 This is my daughter. Her rights are human rights. #WomensRightsAreHumanRights pic.twitter.com/CHWeyfr4tM

#AlabamaAbortionBan #Alabama #AlabamaSenate #NoUterusNoOpinion #PlannedParenthood #ProChoice I love you Alabama prayers to all women and young girls here are my thoughts: pic.twitter.com/LqmVyV8qsA

The abortion bans in Alabama, Georgia, Ohio, Kentucky, and Mississippi are appalling attacks on women's lives and fundamental freedoms.

We will not go back.

Don’t move forward after reading this like everything is normal. Don’t shake your head at Alabama and then keep going about your day. Realize that this is a warning. It’s Alabama and abortion today. It’s you and your rights tomorrow. Your silence will not save you. So speak up. https://t.co/kIz78uAU1T

We have become our grandparents, shaking our heads & saying, “What is the world coming to” but we’re talking about the decay of human rights instead of rock and roll.

I know there are a lot of men out there who have partners who've had abortions. It's time for you to speak up and be allies. Women don't get pregnant alone.

I never thought anyone would disappoint me as much as Donald Trump but then these 25 white male assholes came along. #AlabamaAbortionBan pic.twitter.com/l2WIdWqLeK

I believe that women should have complete jurisdiction over their bodies. RT

Just so I’m understanding this correctly… in Alabama, a man who RAPES & gets a women pregnant will serve LESS time then the person that removes the embryo that was forcefully put in the victim…

THIS IS REAL & is HAPPENING IN THE UNITED STATES OF AMERICA https://t.co/x7juRSCzkD