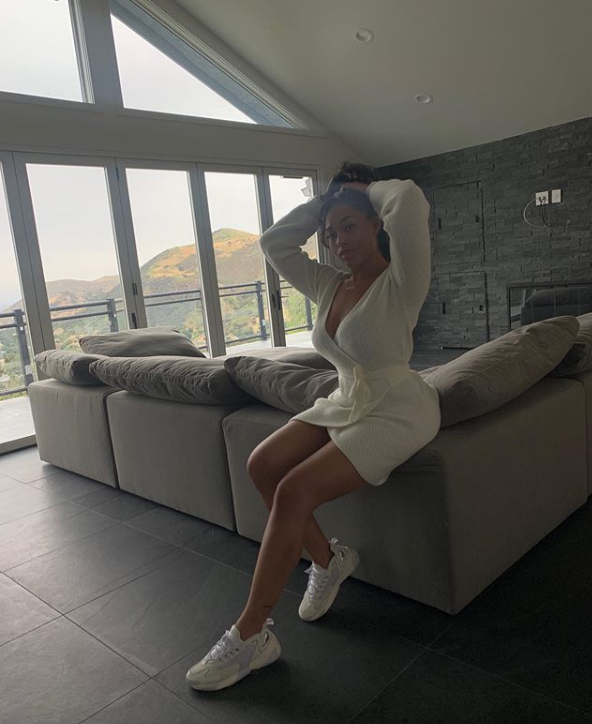 In fact, after being booted from Kylie Jenner’s Hidden Hills, California home immediately after the scandal a few months ago, and having to move back in with her mother, Woods has since rebounded quite well, according to multiple reports as well as her own Instagram postings.

Woods took to Instagram to show off to her 8M followers her new home, replete with massive living room, floor-to-ceiling windows, large gray sectional couch, a gorgeous view of the mountains in greater Los Angles, and a long deck.

“Finally my first piece of furniture arrived!” Woods captioned the photo. “Designing homes is such a task but I’m having the best time doing it. What are some of your house hacks and favorite companies?”

Woods’ followers and friends expressed excitement for her, including beauty YouTuber, Jackie Aina, who said: “I’ll bring some jollof and puff puff sis whenever you’re ready.”

“Jordyn left the guest house and got her own house,” one follower commented under the post. “Yassss, they try to play shorty like she was a bum, she out here glowing,” another exclaimed.

“That’s right!! Get your own identity! Break free!! Do you!!” another follower wrote.

Surprising to most, Woods’ fame skyrocketed in the wake of the Kardashian-Jenner scandal, particularly when Woods admitted her mistakes to Jada Pinkett Smith on the wildly popular “Red Table Talk.”  And, according to Blavity and Yahoo Finance (finance.yahoo.com), she has been “flooded” with business offers, both domestically and internationally, in the few months since the scandal.