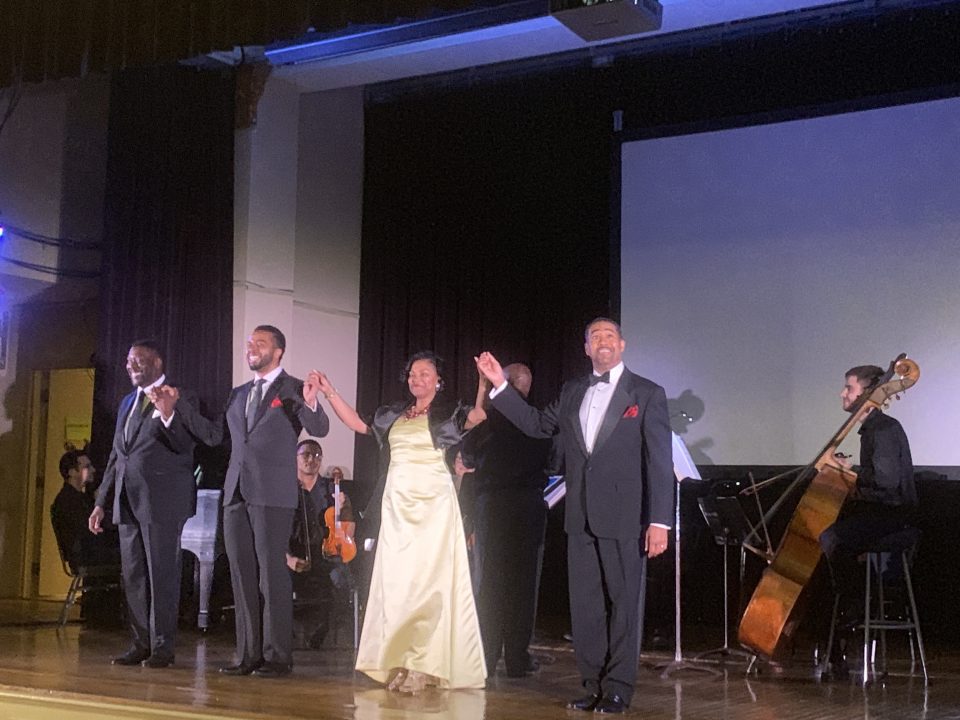 Even with the torrential rain and thundering storm on early Sunday evening, June 30, The South Shore Opera Company of Chicago electrified the audience gathered at the South Shore Cultural Center presenting the Tremendous Tenors Tribute Concert. The concert featured some of the best operatic tenor singers, all of whom were Black men. The program featured history, music, celebration and some surprises, all to pay tribute to several groundbreaking gentlemen whose talent and determination blazed a trail in the world of opera. The event was filled with melodic, awe-inspiring sounds as well as a cast of black male tenors such as: Roland Hayes, Vinson Cole, Lawrence Brownlee, Steven Cole, Issachah Savage, Russell Thomas, Noah Stewart, Rodrick Dixon, Charles Holland, and the night’s honoree, George Shirley.

The three tenors paying tribute to the greats via selections from popular operas were Cornelius Johnson III, Luther Lewis III, and Henry Pleas III. They brought down the house with selections from Porgy and Bess, Otello, Carmen, Hiawatha’s Wedding Feast, and much more. The surprise of the evening came when Chicago’s own Rodrick Dixon, one of the tenors being paid tribute to, arose from the audience to thunderous applause as he sang “Make Them Hear You!” from Ragtime.

The night was topped off by a tribute to George Shirley, The Joseph Edgar Maddy Distinguished University Emeritus Professor of Music and former Director of the Vocal Arts Division of the University of Michigan School of Music, Theatre and Dance. Shirley’s accolades include international acclaim for his performances with the Metropolitan Opera as the first Black tenor to sing leading roles with major symphony orchestras, opera houses and festivals across the world. He also received a Grammy award in 1968 and has performed more than 80 operatic roles over the span of his 60-year career. Additionally, Mr. Shirley was the first Black American member of the United States Army Chorus in Washington D.C. In accepting his honor from another tenor, Luther Lewis III, Lewis shared with deep emotion how Mr. Shirley’s presence on the opera stage made it possible for him to envision himself there as well. During his acceptance remarks, Mr. Shirley shared with the audience that his journey to opera had not been something he’d envisioned for himself and that God ordained his steps to be an artist, a mentor, a trailblazer and a teacher for the next generation of musicians who look like him.

This tribute concert highlighted the lengths these men had to go through to be top artists in a world that wasn’t always kind and accepting years ago, and continues to struggle with diversity on opera stages in present day. These examples of talent and the production of such a magnifying event in the South Shore community in Chicago also serves as an invitation of access for more African Americans to enjoy opera and classical music. The talent of these tremendous tenors is the pinnacle of Black excellence.

Check out the impeccable singing after the flip.