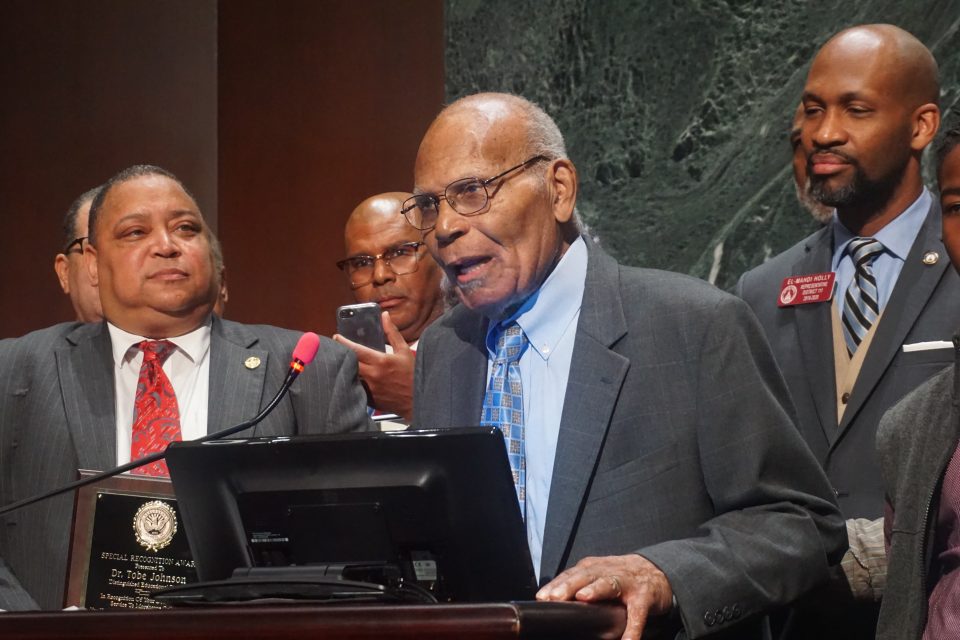 Dr. Tobe Johnson during a ceremony in his honor at the Atlanta City Hall. (Photo credit: Joy Nealey for Steed Media)

It is homecoming week at Morehouse College, and what better way to kick off the celebration than by honoring one of the all-male HBCU’s most notable alumni and faculty members.

There is a saying that goes, “give roses to the living while they can still smell them (sic).” With the love of family, friends and the men of Morehouse, that is exactly what happened for Dr. Tobe Johnson, on Monday, Oct. 21, 2019, at Atlanta City Hall.

Johnson has been an esteemed member of a special brotherhood at Morehouse College for the last 70 years – as a student, an alumnus, a professor, and an administrator.

Having received his Bachelor of Arts in Political Science from Morehouse College in 1954, Johnson has been making a positive impact on the lives of many of the Morehouse men that have come through his classroom. With his emphasis on political science, the scholar has created college courses on politics, policy analysis, and urban management to ensure that his students are equipped with the right knowledge. 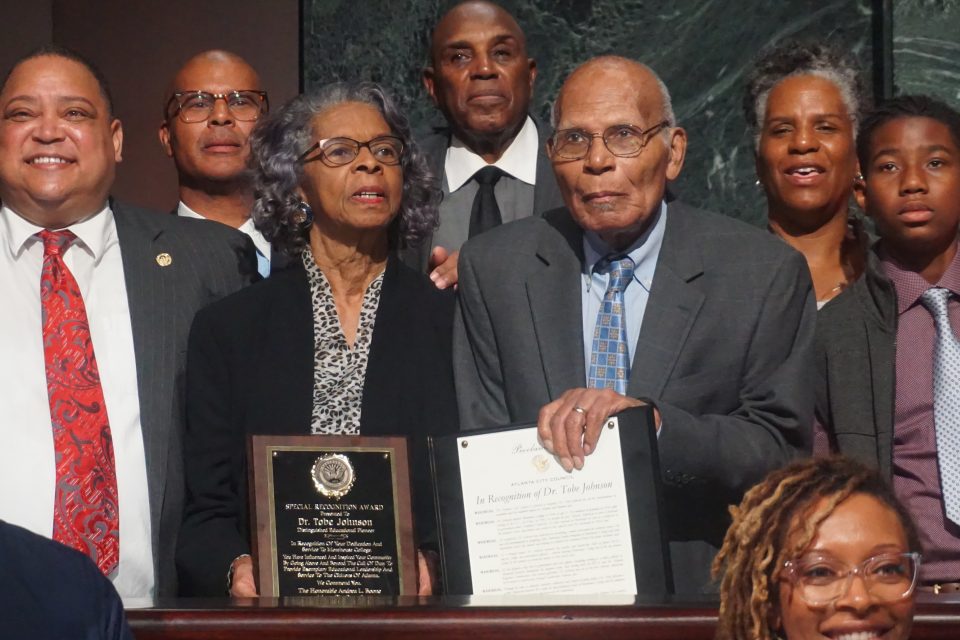 This year, Oct. 21 was declared Dr. Tobe Johnson Day in the city of Atlanta, marked with a reception in the City Hall Atrium followed by an official ceremony in Johnson’s honor. Family and friends joined Morehouse president David Thomas and provost Michael Hodge gathered on stage along with alumni and dignitaries for the auspicious occasion.

“His impact … is tremendous,” said Atlanta City Councilmember Michael Julian Bond. “He has mentored every major political figure that is an alum of Morehouse for the last 50 years.”

“We cannot find a more fitting time, a more fitting person, who has been more responsible than most for the last 60 years producing attorneys, judges, [and] those who are thought leaders on a political system,” added director of alumni relations, Henry Goodgame.

Those sentiments were echoed by John Eaves, a former Fulton County Commission chairman and current candidate for Georgia’s 7th Congressional District. “Dr. Johnson is one of those Morehouse giants who was part of the anchoring of the institution [and] the faculty, so he is like a time-honored tradition being there year in and year out.”

Representative El-Mahdi Holly praised Johnson for his knowledge of the law and unwavering support of Morehouse students. “… Not only through the college but also [by] giving them help as they went on to law school. … He always held very high standards for us.”