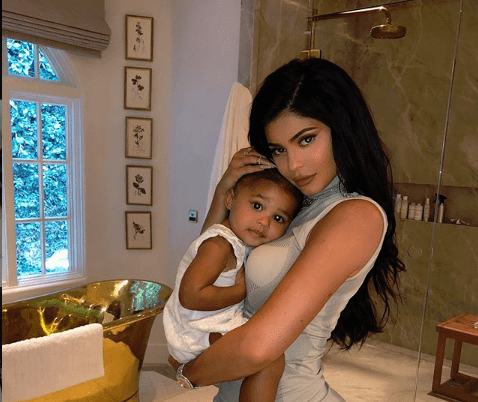 The former couple — who split in September 2019 — were in good spirits as they joined forces to put on the extravagant bash for Stormi’s second birthday.

The pair put on “Stormi World: 2 is Better Than 1” after last year’s inaugural party themed around the tot’s father’s Astroworld LP.

The entrance to the amusement park, where guests enter via the mouth of a giant inflatable Stormi, was erected once again.

Once inside the park, guests — which included John Legend, his wife Chrissy Teigen and their 3-year-old daughter Luna, singer Rosalia and Jenner’s mom Kris Jenner — were given maps to navigate “Stormi World,” “Frozen World” and “Trolls World.”

All of the rides, merchandise and Stormi’s cake and many other items had “Stormi World” emblazoned across them.

In a clip shared on Jenner’s half-sister Khloé Kardashian’s Instagram Stories, Stormi’s mom could be seen singing happy birthday to her little girl as Travis held her in his arms.
Earlier in the day, Kylie admitted her life “changed forever” when she welcomed her baby girl into the world.

The “Keeping Up With the Kardashians” star wrote on Instagram: “And just like that she’s two … happy birthday to my Stormi. February 1st 4:43pm the moment my life changed forever. We were meant for each other stormiloo.”