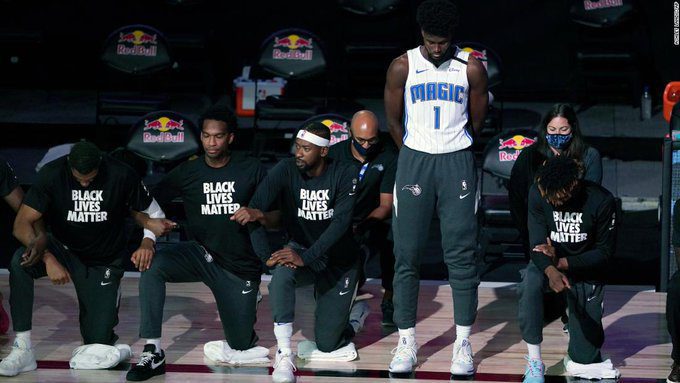 Orlando Magic forward, Jonathan Isaac became the first player to stand for the national anthem, as the rest of his teammates, coaches, referees and opposing players kneeled in unison on July 31, 2020.

Isaac answered questions after the contest, clad with a royal blue face mask, providing enigmatic, religious-based reasoning as to why he did not kneel, nor wear a Black Lives Matter t-shirt.

“For me Black lives are supported through the gospel. All lives are supported through the gospel,” said, who intentionally sported his Magic jersey versus a BLM shirt. “We all have things that we do wrong and sometimes it gets to a place that we’re pointing fingers at who’s wrong is worst. Or who’s wrong is seen, so I feel like the Bible tells us that we all fall short of God’s glory. That will help bring us closer together and get past skin color. And get past anything that’s on the surface and doesn’t really get into the hearts or men and women.”

The Orlando Magic’s Jonathan Isaac became the first NBA player to stand for the National Anthem as the league resumed play after a 20-week hiatus due to the coronavirus pandemic https://t.co/nyOdmHcsP8

Magic owners, the DeVos family, issued a statement of support for their players prior to the game, which did not center on Isaac’s decision to stand during the anthem.

“The DeVos Family and the Orlando Magic organization fully supports Magic players who have chosen to leverage their professional platform to send a peaceful and powerful message condemning bigotry, racial injustice and the unwarranted use of violence by police, especially against people of color,” the statement said. “We are proud of the positive impact our players have made and join with them in the belief that sports can bring people together — bridging divides and promoting inclusion, equality, diversity and unity. We know this is not about the military, the men and women who serve honorably to keep our communities safe for all, or those who have paid the ultimate price to provide freedom, including freedom of expression.”

Reactions on social media have begun to pour in and there are understandably conflicting views. View his entire explanation after the jump.