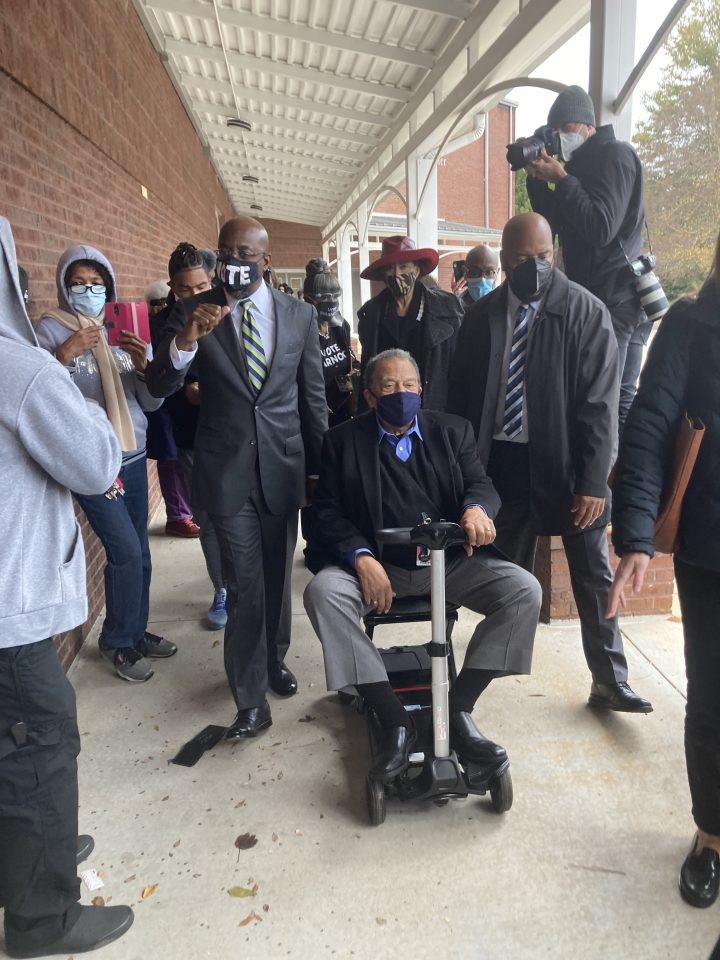 On Monday, Dec. 14, 2020,  in the heart of southwest Atlanta at the C.T. Martin Natatorium, early voting kicked off with a crowd. The night before, torrential rain had threatened to impede those eager to cast their ballots. However, as the polls opened, a line snaked out the door and the sun appeared. When U.S. Senate candidate Rev. Raphael Warnock arrived with former U.N. Ambassador Andrew Young, they were met with greetings from friends and neighbors.

Watching the two men enter the voting booth, the historical significance of the moment was not lost. Young, an elder statesman and the first African American from Georgia since Reconstruction elected to Congress, was endorsing Warnock in his bid to become the state’s first African American U.S. Senator. It was clear that a generational baton of leadership had been passed. In this community, which has lost three great leaders this year — the Rev. Joseph Lowery, the Rev. C.T. Vivian and Congressman John Lewis — this represents hope for many. Warnock has proven himself worthy through his dedication to empowering community and his commitment to building on the legacy of others.

Arriving at this place began with lessons Warnock learned during his very humble childhood. Growing up in the Kayton Homes projects of Savannah, Georgia, he witnessed the struggles and inequities of poverty. His foundation was built by family, faith and compassion for others. He credits his father for guiding him. “Every day at 6 a.m., my dad would come through my bedroom door, wake me up and say, ‘Put your shoes on, son. Get ready.’ And if I asked him why, he would say, ‘Because there’s something for you to do. I don’t know exactly what it is yet, but be ready.’ I’ve committed my whole life to service and helping people, and that has prepared me for this moment.”

Touched by the disparity in education and lack of economic opportunity felt by many in the Deep South, racism was more than a word. But Warnock had a plan, inspired by the work of the Rev. Martin Luther King Jr. and an early call to the ministry. He knew that the embrace of the church extended beyond its doors. Even before he arrived at 35 to pastor Ebenezer Baptist Church, known as “America’s Freedom Church,” his urban ministry included outreach to individuals and families. He has demonstrated a strong belief that everyone deserves the opportunity to prosper. Warnock reflects, “As a pastor, I hear from a lot of Georgians — the ones I’ve counseled at my church and those like them across the state who wonder why no one is looking out for them. That’s a sense people have, especially in the times we’re facing now.”