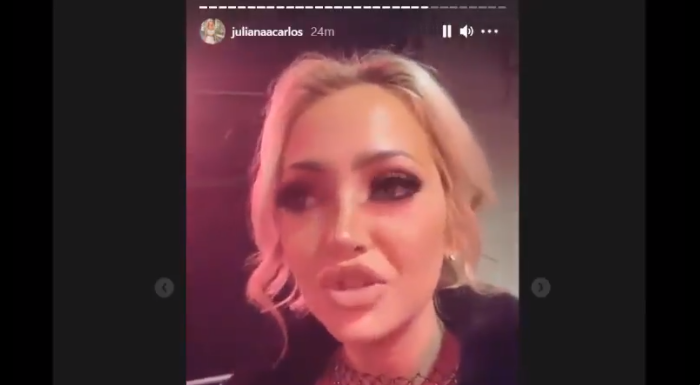 The female basketball fan derisively dubbed “Courtside Karen” is now apologizing for her infamous outburst directed at LeBron James during a game between the Los Angeles Lakers and Atlanta Hawks on Monday evening, Feb. 01, 2021.

“Courtside Karen,” who has been identified as Juliana Carlos, has taken full responsibility for being ejected from State Farm Arena in Atlanta after removing her face mask to unfurl a stream of foul language at King James.

The situation quickly spiraled out of control during the fourth quarter of the game, which ended in a Lakers victory over the Hawks, 107-99. Carlos yelled at King James after her husband, Chris  Carlos, made an offensive remark to James that prompted the Lakers forward to fire back with his own tart retort.

The matter quickly ratcheted up several notches when Juliana Carlos bolted out of her courtside seat, removed her mask and began yelling and swearing loudly at King James. Officials were concerned enough to stop the game. Immediately thereafter, security ordered the Carloses and their small entourage out of State Farm Arena.

Walking along the corridors on the way out of the arena, Julianna Carlos went off on another profanity-laced diatribe about James that eventually garnered her the nickname “Courtside Karen.”

James said he was unbothered by Carlos and, in fact, felt the couple should not have been removed from the game. According to ESPN, James said he misses playing in front of packed arenas and welcomes the energy fans bring to the game.

LeBron on his interaction with spectators in Atlanta on Monday: pic.twitter.com/spWDITZqkl

After dismissing “Courtside Karen” as a nonfactor, James could not resist poking fun at Carlos after the game.

The nickname subjected Carlos to abject humiliation, and she was mocked endlessly for most of Tuesday.

After an investigation by Atlanta Hawks officials, they decided not to ban the Carlos family from the game, and Juliana Carlos apologized on behalf of herself and her husband.

Flip the page to view Carlos’ mea culpa. Also, check out what James had to say later about the incident. It appears he actually was bothered by Carlos’ histrionics.