Fans went crazy when Lil Fizz gave a live onstage apology to former B2K bandmate Omarion for romancing the mother of Omarion’s children, Apryl Jones, not long after the couple had broken up.

Fizz walked out in front of thousands of fans in the middle of the Millennial Tour 2021 at The Forum in Inglewood, California, on Saturday, Oct 2, 2021. The concert tour also features Bow Wow, Ashanti, Pretty Ricky, Ying Yang Twins, Lloyd, Sammie and Soulja Boy. 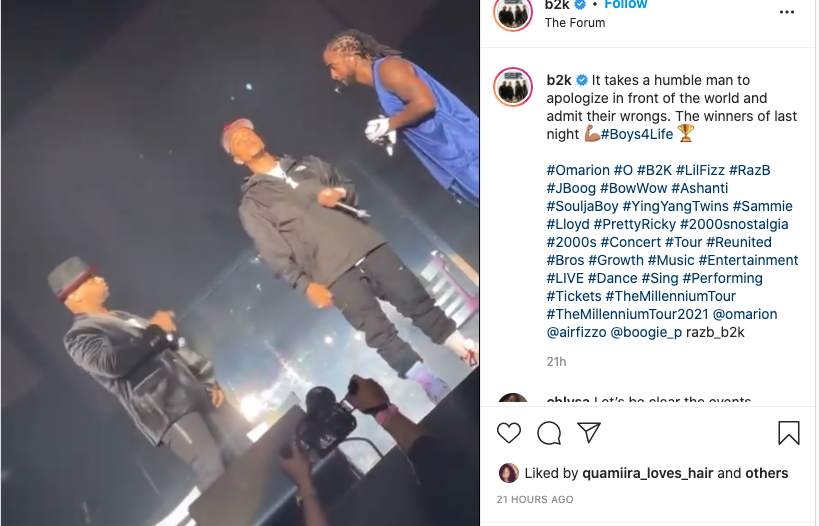 “I did some f—ed up s— to my brother. I did some snake a– shit, and I’m not proud of it,” a contrite Fizz began as the crowd roared its approval.

“So, I want to sit here humbly and sincerely apologize to you for any turmoil or dysfunction I caused between you and your family,” Fizz said as fans screamed even louder.

B2K even posted the apology for its 80K Instagram fans, saying “It takes a real man to apologize in front of the world and admit their wrongs,” the comment wrote. “The winners of last night. #Boys4Life.”

Fizz, 35, who was born in New Orleans as Dreux Pierre Frédéric, and Jones greatly angered fans when the two flaunted their imprudent romance publicly before a legion of Omarion sympathizers in 2019. Fizz and Jones even made the hookup a major storyline on the popular reality show “Love & Hip Hop Hollywood.”

This may explain why fans are split on whether they can accept Fizz apology. Some believe Fizz committed an unpardonable transgression by having sex with the mother of Omarion’s children — right after they broke up. Others question Fizz’s sincerity in the belief that his pockets have gotten thin in the two years since this debacle went down.

Well this is different. #LilFizz publicly apologized to #Omarion live on stage in front of thousands of people during the #MillenniumTour for smashing his baby mama !

Fellas would y’all accept an apology from your homie who smashed ya baby mama? pic.twitter.com/CGaUFs3nO1

Not Lil Fizz interrupting Omarion’s set to apologize after all this time…. Bye asf.

Lil Fizz’s well running dry; because he publicly apologized to Omarion after all the clownery he was doing with Apryl the last couple of years.

They must’ve broken up and he tryna get back on the Millennium Tour with B2K. 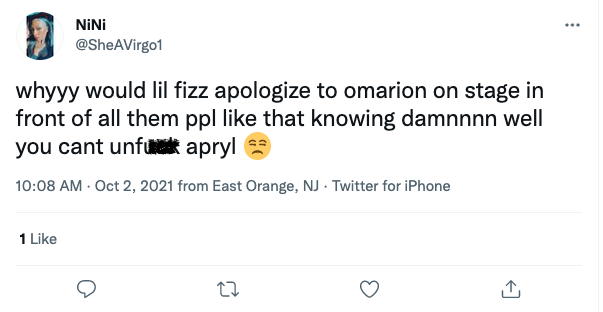 Lil fizz apologizing to Omarion was growth. He knows that he shouldn’t have dated his friend baby mama in the first place.