Christian Cooper, the famous Black bird-watcher in New York’s Central Park who had the police called on him under false pretenses by a racist White woman, is now getting his own TV show.

Cooper will host the series titled, “Extraordinary Birder,” on the National Geographic network that will take viewers on a journey through the “wild, wonderful and unpredictable world of birds” throughout the country. The show is scheduled to debut in the spring of 2023.

Christian Cooper, the Black man who was bird-watching in Central Park the day he was falsely accused by a white woman of threatening her, is getting his own bird-watching TV show on National Geographic https://t.co/XeYqnViPah

“Whether braving stormy seas in Alaska for puffins, trekking into rainforests in Puerto Rico for parrots, or scaling a bridge in Manhattan for a peregrine falcon, he does whatever it takes to learn about these extraordinary feathered creatures and show us the remarkable world in the sky above,” the network said in a statement obtained by Business Wire.

Cooper told the New York Times that he didn’t hesitate to jump at the opportunity the moment National Geographic contacted him. For him, it was a dream come true.

“I was all in,” Cooper told the Times. “I love spreading the gospel of birding.”

He then said on his Facebook page that “birding has exploded in popularity recently, and I’m looking forward to putting a spotlight on these amazing creatures and the extraordinary birders who love them and work to protect them!”

Cooper made headlines around the world on May 25, 2020, the same day that George Floyd lost his life in Minneapolis. A White woman named Amy Cooper (no relation to Christian Cooper) walked her dog without a leash in the area of Central Park called The Rumble which requires a leash.

Amy Cooper, as has been reported ad nauseam, took umbrage that Christian Cooper admonished her about putting a leash on her dog. The woman then aggressively confronted the bird-watcher, which was captured on video, and threatened to have him arrested because he is Black.

“I’m going to tell them there’s an African American man threatening my life,” Amy Cooper yelled in the video. Once she contacted the NYPD, she screamed as if she were in pain and that her life was in danger.

Of course, her report was false, and the video that was posted online by Christian Cooper’s sister has been viewed more than 45 million times on Twitter. The backlash and consequences for Amy Cooper were swift and severe. She lost her cushy executive job with a renowned financial company on Wall Street and was charged with filing a false police report. 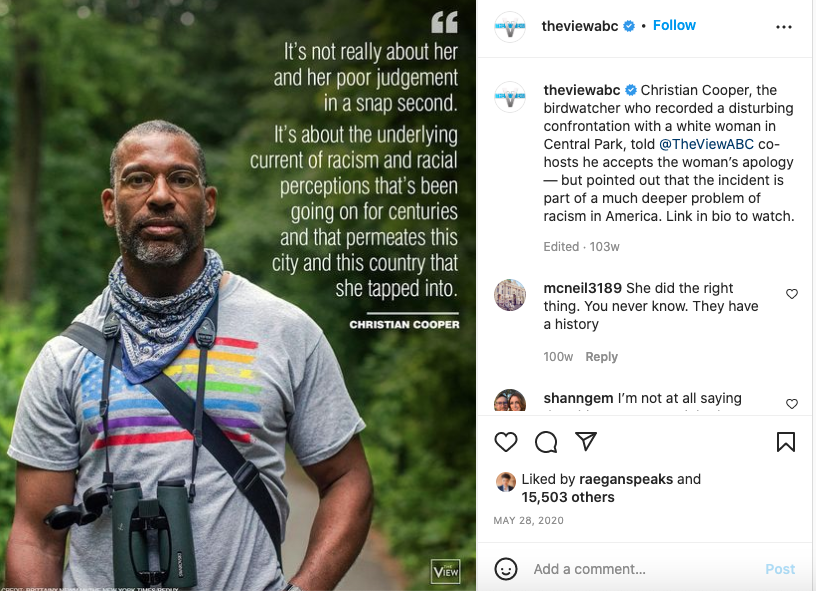 Fortunately for Amy Cooper, Christian Cooper refused to cooperate in the prosecution and the charges were eventually dropped.

However, the heroine of this entire dark episode, Christian Cooper’s sister Melody, who decided to post the video to prevent  unarmed Black men from being accosted, joined her brother on “The View,” to break down the entire incident. Check out the report by “Good Morning America” as well.