Bobby Brown’s sister called his wife “evil” for her allegedly insensitive words about his late wife Whitney Houston and treatment of his deceased children.

Leolah Brown Muhammad went volcanic on Brown’s current wife, Alicia Etheredge, for insinuating in an interview with People magazine that Brown’s previous marriage to Whitney has overshadowed theirs.

“Bobby and Whitney were their time,” Etheredge said in the interview. “I also came from a place. So knowing that he loved hard and came out the other end and somehow we were meant to be and found each other again, that’s what I focus on.”

Brown’s sister took off like a rocket after Etheredge for words she believe lacked tack and delicacy that is required when talking about an all-time great singer — who also used to be his brother’s wife.

“Paleez WHITNEY HOUSTON WILL NEVER BE FORGOTTEN,” Brown Muhammadraged on Facebook. “TRUST ME Bobby Brown can never forget such a real woman. No worries. Whitney had a strong spirit that B can’t forget. That’s THE impossible. Whitney probably comes in his dreams.”

“She wants him to forget so she can be the only thing around him. This is why his children by Whitney and Kim are targeted,” Leola went on arguing. “Alicia wants it to be just her & him for HIS LEGACY PURPOSES. Oh she got plans … but God has BIGGER PLANS for Bobby. And surprises for her evilness.”

In addition to the Houston remarks, Brown Muhammad was equally incensed about what Ethedge said in reference to Brown’s two late children, daughter Bobbi Kristina Brown, and son Bobby Brown Jr., during the interview.

“Don’t you all believe Alicia talking about my niece Bobbi Kristina & my nephew Bobby Jr.,” Brown Muhammad fumed in one of several Facebook posts.

In her latest Facebook rant, Brown Muhammad charged forcefully that Etheredge is trying to take control of her husband’s interview — and his life, for that matter. 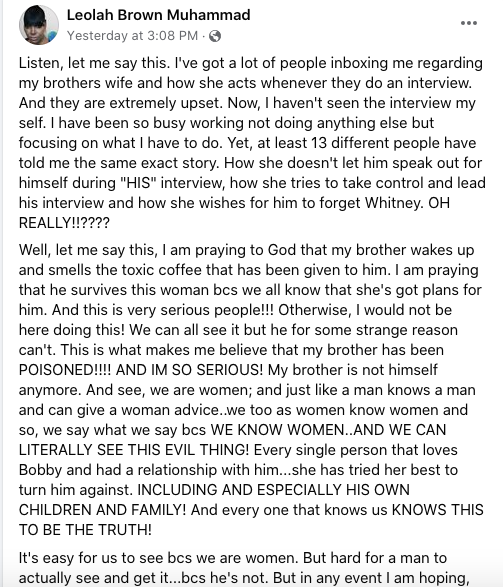 “I’ve got a lot of people inboxing me regarding my brothers wife and how she acts whenever they do an interview. And they are extremely upset,” she explained. “At least 13 different people have told me the same exact story. How she doesn’t let him speak out for himself during ‘HIS’ interview, how she tries to take control and lead his interview and how she wishes for him to forget Whitney. OH REALLY!!????”