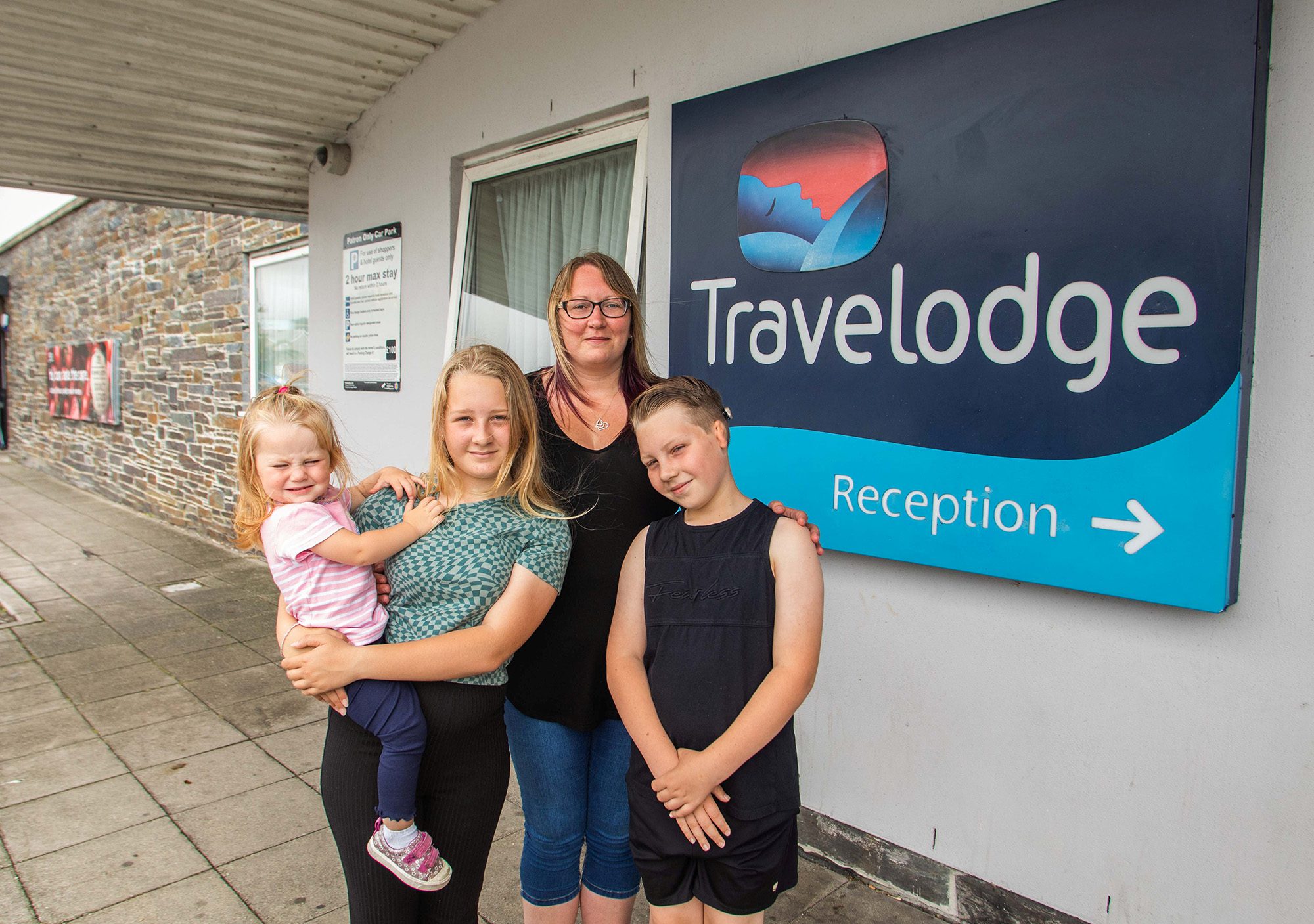 A struggling family evicted from their house in Britain has been living in a Travelodge hotel for four months – as local authorities struggle to resettle them.

Charlene Pascoe, 34, and her three kids were left with nowhere to go after being evicted from their rental property earlier this year.

They have been staying in a hotel room in St. Austell in Cornwall, southern England, in the United Kingdom, for 15 weeks with no idea when they’ll be able to leave.

Pascoe, Freya, 12, Kieran, ten, and Darcy, two, have had to rely on their family and friends who live nearby for meals and playtime away from their Travelodge room.

Pascoeis from St. Blazey, Cornwall – a county where some areas have up to 40 percent of properties are used as second homes.

She said: “Somebody said to me at the beginning ‘look at it like a holiday’ – it’s most certainly not a holiday.”

The family were first uprooted back in March when their landlord decided to move back into the property they were renting.

Pascoe was unable to find anywhere affordable in the area, and their first night after their tenancy ended they spent sleeping on her mom’s floor.

Cornwall Council authorities booked the family into a Premier Inn for a week, before they were then moved to St. Austell Travelodge – where they have been ever since.

Now 15 weeks later they are no further forward, and Pascoe is now struggling to cope.

The family Travelodge room has just three beds, a bathroom, a kettle and a cooler – with no kitchen or living area.

Thankfully, Pascoe’s mother Sonia Johns, 57, lives a 15-minute drive away and she has been spending as much time as possible there.

At Johns’ she is able to cook dinner for the kids, wash their clothes, and enjoy some time away from the hotel room which is cluttered with all their belongings.

Pascoe, a support worker for adults with learning difficulties, said: “We’ve had to put the majority of things in storage but the stuff we need still takes up loads of space.

“I look every day for houses on the council website to get us out of this mess but you can only bid on one property a week and it’s always so busy.

“I have one daughter in a big school, a son in junior school, and a toddler starting nursery in September, – but if we can’t find somewhere soon they’ll have to move schools.

“Every day organizing meals is stressful as we have nowhere to store food so it’s daily trips to the shops.

“We then cook the food from that shop at mom’s and do it all again the next day.

“I don’t know what we’d do if we didn’t have mom’s place because as soon as we wake up in the morning that’s where we go.

“We then only come back to the Travelodge to sleep otherwise it’s just too much.”

Pascoe has struggled bringing up two-year-old Darcy in the Travelodge as the noise from other rooms and the parking lot stops her from getting to sleep.

The hotel staff are sympathetic to her situation, and allow Kieran and Freya to watch TV out in the cafe area whilst Pascoe puts her to bed.

Pascoe is currently paying about three British pounds, the equivalent of $3.79, as a service charge for the room, and Cornwall Council authorities are covering the rest.

But communicating with the council is near impossible and she is rarely updated on their living situation.

In fact, Pascoe has to find out from reception staff every three weeks whether payment for the room has been extended which she finds extremely stressful.

“Having a two-year-old is a complete nightmare as everything is in her reach,” Pascoe said.

“She either stays in her travel cot or her portable high chair when we’re in the room, as it’s too dangerous to let her crawl around.

“At the moment it’s quite noisy as it’s the summer holiday and people are often slamming doors and shouting.

“It is also ridiculously hot but when you open the windows there is more noise pollution.

“The hotel staff have been amazing throughout and they’re always willing to help out if we need.

“They are the ones I ask about updates on our situation as the housing team at the council barely respond to my queries.

“At the minute they’re paying for the room, but there is a service charge I’ll have to reimburse them with at some point.

“I’ve worked out it should be around 350 pounds [$427] by now – but again, I’ve had no communication from them about when this is to be paid.

“Renting privately is just too expensive so we are limited in the options we have.

“All I can do is keep looking for council housing in the hope that I get lucky – although at the minute it seems like there is no light at the end of the tunnel.”