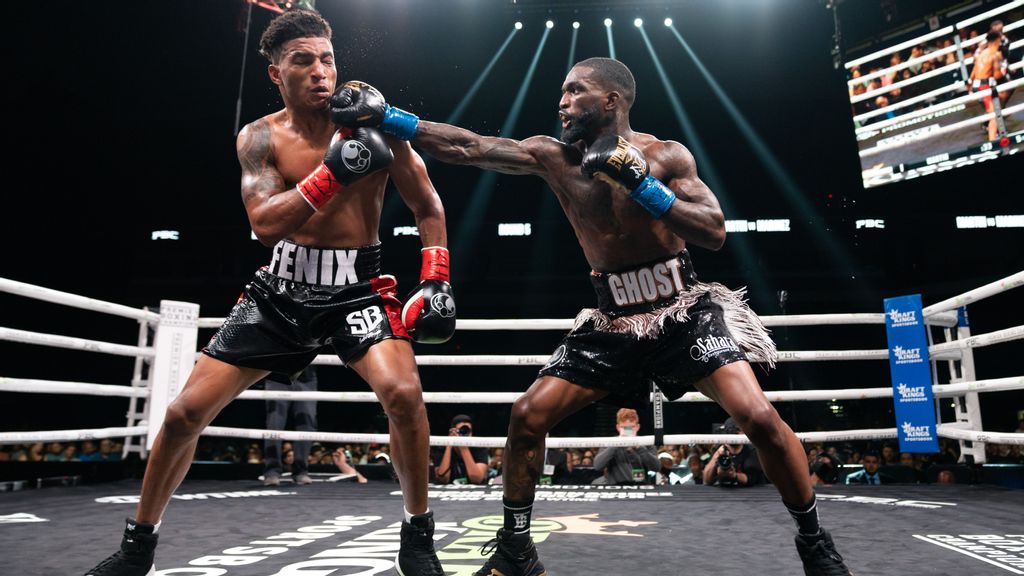 Frank Martin earned his nickname “The Ghost” while training in darkness in a Salt Lake City, Utah, gymnasium the night before 2016 National Golden Gloves title bout.

When the lights suddenly went out, Martin’s shadowy silhouette danced against distant walls, while other competitors stopped training.

“My coaches started using the flashes from their phones, and I just continued to run around the room, shadowboxing. I was determined to get my work in,” said Martin, who compiled an amateur record of 52-6.

“The Ghost” won the 2016 Golden Gloves Tournament of Champions at 141 pounds, flooring Vergil Ortiz in their title bout.

But the moniker may also refer to his firepower. One solid punch and its lights out for his opponents.

“I just dropped him one time in the fight,” said Martin of Ortiz, who is currently 19-0 (19 KOs) as a professional welterweight. “I didn’t know who Vergil Ortiz was at the time. I just went out there to win it.”

In fact, Martin has stopped six of his last seven opponents, displaying a blend of athleticism, blazing speed, combinations and finishing skills that incorporate his ability to land from various angles with double-fisted power.

“Training with Errol and also being a southpaw style-wise helps a lot. Errol’s been on top of me, mentally pushing me,” said Martin, who shares trainer Derrick James with Spence. “Sometimes, when I’m overworking myself, he makes sure to regulate me and to keep me on point. It’s a real blessing.”

“Errol’s in the gym with Frank watching him train with great sparring partners and you’re going to see more of Frank’s entire skill-set as far as speed, athleticism and technique,” James said.

“With Errol being a southpaw, we’re helping Frank to see things that he may not ordinarily see. It’s great to see a champion grooming another fighter, bringing him along and keeping him focused.”

The Martin-Rivera bout is three weeks before a Jan. 7 defense by three-division and WBA 135-pound champion Gervonta “Tank” Davis (27-0, 25 KOs) against rising 130-pound title Hector Garcia (16-0, 10 KOs) in a clash of southpaws at The Capital One Arena in Washington, D.C.

Davis and Martin sparred in August 2020 in advance of “Tank’s” sixth-round stoppage of four-division champion Leo Santa Cruz that October.

“There were a lot of people in the gym, and nobody left disappointed. Gervonta has skills and power, and that definitely showed me where I’m at. That was great work and a huge motivation — because it was before I got to the level I’m at right now,” said Martin, who stands 5-foot-8 to Rivera’s 5-foot-9.

“I feel like I’m right there, growing and developing in confidence. I know that I can get in there with the top dogs and do my thing, too. If I execute like I’ve been doing in training camp, I expect to win this fight in spectacular fashion over the 12-round distance or else I can land a big, knockout shot.”

Martin fought twice in 2021, comprising a seventh-round stoppage of previously unbeaten Jerry Perez in April and a 10-round shutout of Ryan Kielczweski in August. Martin pitched shutouts of Kielczweski and Perez, who entered at 13-0 (10 KOs).

During a 10th-round stoppage of Jackson Marinez In his last fight in July, Martin scored ninth and final round knockdowns of a boxer who went the distance during a disputed loss to then-unbeaten title challenger Rolando Romero in August 2020.

“I’ve looked at what we both did against Perez. Styles make fights,” Martin said. “Rivera may not fight me the way he fought Perez. Michel Rivera is a good fighter. I’m expecting to see the best version of him.”

Rivera vanquished a pair of southpaws in 2020, winning by 10th-round TKO over Fidel Maldonado Jr. in February and 10-round unanimous decision over Ladarius Miller in October.

“Martin is a strong opponent with a good record, but I’m ready to show that I am the future of the lightweight division,” said Rivera. “This is the type of fight that I’ve been asking for, and I can’t wait to get into the ring.”

The youngest of six siblings — three boys, three girls — Martin discovered boxing as a 17-year-old in Detroit and became more dedicated after moving that year to Fort Wayne, Indiana, where he was coached at the Sarge Johnson Boxing Center by local police officer Pat McPherson, two-time Indiana Golden Gloves champ Ike Boyd, and his father, Frank.

Martin attended the city’s Homestead High School, where he played running back in football and competed in wrestling at 152 pounds. Martin qualified for the state wrestling tournament as a junior and was undefeated as a senior before impetigo prematurely ended his season.

“When I first started fighting, I was good at football and wrestling and then boxing sort of became intertwined,” Martin said. “I got serious about it and moved to Indianapolis.”

Martin was 11-0 (8 KOs) when his first cousin, NFL linebacker, Jaylon Smith, connected with James on his behalf.

Spence signed Martin, whose first bout was a four-knockdown, fifth-round stoppage of Tyrone Luckey on the December 2020 undercard of Spence’s unanimous decision over former titleholder Danny Garcia on pay per view at AT&T Stadium in Arlington, Texas.

“Rivera’s technically sound and seems to have a determined mentality. I’m just a few steps ahead of Rivera and have more in the arsenal as far as having speed, power and ring IQ,” Martin said.

“I’m excited to execute my game plan, come out with the victory and prove to myself and the fans how great I am.  I’ll be ready for a title shot after getting this victory over Michel Rivera.”

The post Frank “The Ghost” Martin Wants To Scare Michel Rivera And The 135-pound Division Into Submission appeared first on Zenger News.