5 things to know about mom of Chicago teen, Pierre Loury who was shot by police

Another Chicago mother is grieving the loss of her child after the police shot and killed him Monday night.

Chicago police say they were searching for a vehicle that had left the scene of a shooting, WGN reported. Authorities say officers spotted 16-year-old Pierre Loury in the suspected vehicle. The police claim that when they attempted to pull over the car at about 7:30 p.m., Loury got out and ran.

The police reportedly searched for the suspect throughout the North Lawndale and Homan Square neighborhoods on the West Side of Chicago. Authorities allege that at some point, Loury pulled out a gun and pointed it at a cop, which caused the officer to shoot him. A gun was supposedly found at the scene.

Loury died at a hospital less than an hour after he was shot.

The teen’s mother, Tambrasha Hudson, was seen with her eyes filled with tears on the news and as she marched at the recent vigil honoring her son. Here are 5 facts about the grieving mother.

Loury was her oldest child.

Although Loury was only 16, he had four younger siblings. According to WGN, the teen helped Hudson take care of them. She posted one touching photo on Facebook of Loury and his sister and wrote, “They play so much she loveeee her big brother Pierre.”

She thinks her son should not have been killed.

Loury’s family says he was not perfect, but that he did not deserve to die. Although the teen was said to be a member of a gang, according to police, and he was also pictured with a gun on his social media page, his mother says he was just a boy who went to high school and sometimes hung out with friends.

“My baby gone. I shouldn’t have to bury my child,” Hudson told reporters. “My child’s supposed to bury me.”

She does not believe he pulled out a gun.

Although police stated that a “brief foot pursuit ensued leading to an armed confrontation, between the fleeing offender and the officer,” that story isn’t adding up. One eyewitness said that Loury was climbing a fence when he was shot dead.

“They shot him in the air,” an unidentified woman told the Chicago Tribune. “His pants leg got caught on the fence and he hit the ground. If he hadn’t gotten shot, he would have cleared the fence.”

Longtime friends of Loury’s said he was not the kind of boy to pull out a gun on anyone. Hudson said her son did not even own a gun.

She loved her son.

Not only has the heart-breaking images of Hudson openly grieving for her beloved son been a testament to how much she cared about him, but the few words that she’s uttered about the situation has also shown how devastated she is.

“My baby’s gone. What I’m gonna do now?” she cried when WGN reporters visited her home.

She was worried about the violence in Chicago.

Hudson documented cases of violence in her neighborhood several times on her Facebook page. She would express her condolences for people close to her who had lost a loved one due to gun violence, and she even expressed her hope for the killing to end.

“Omg wat have Chicago became Im soo sick of the senseless violence that has TAKEN OVER our city,” she wrote in March. 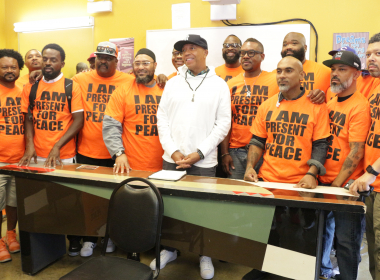