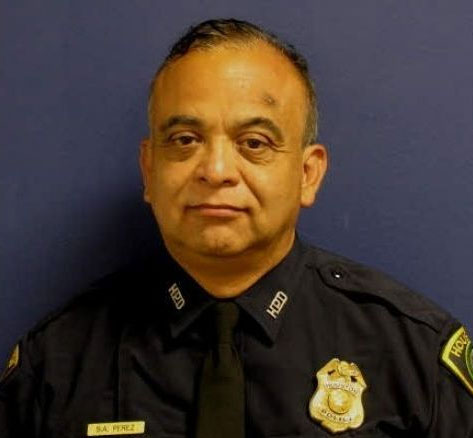 The Houston Police Department is mourning the loss of one of their own in the wake of Hurricane Harvey flooding. On Tuesday morning, police announced the discovery of the body of Sgt. Steve Perez, 60. Perez was a 34-year veteran of the force and was on his way to work on Sunday when his patrol car became trapped in flood waters.

Houston Mayor Sylvester Turner announced the tragedy during an emotional press conference on Tuesday. According to The Houston Chronicle,  Perez would leave his home at 4 a.m. to make a 2.5 hour drive each day ahead of his shift to find a safe route to work by avoiding floodwaters.  Apparently, the officer took a wrong turn on Sunday and became trapped in his patrol car and drowned.

When he did not appear at Monday morning roll call, his supervisors grew concerned and called his wife. She informed the police that she had not seen her husband since Sunday morning and a search was commenced. Based on the information they received from his wife, they found Perez’s submerged car on Monday night but could not recover his body. Houston Police Chief Art Acevedo stated tearfully, “We could not put more officers at risk for what we knew in our hearts would be a recovery mission.”

Search and rescue crews, including a dive team and a “Cajun Navy” member, recovered his body from an underpass on Tuesday, Acevedo said.

According to officials, more than 3,600 people have been rescued from the rising flood waters of Hurricane Harvey. The storm has dumped more than 50 inches of rain on the Gulf area and large parts of Houston, Texas are submerged. Perez’s death brought the number of people killed to 15 since Hurricane Harvey made landfall last Friday.