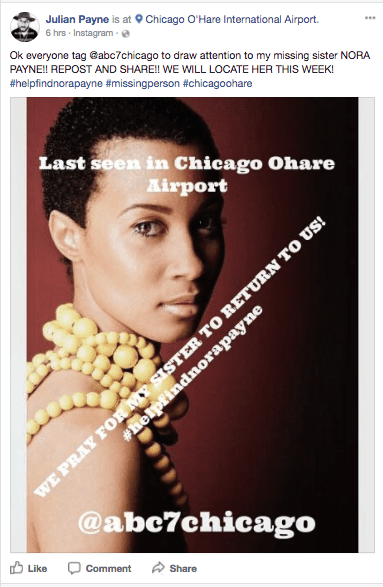 Norah Payne who co-wrote Michael Jackson’s “You Rock My World” alongside Jackson himself, Rodney Jerkins, Fred Jerkins III and LaShawn Daniels disappeared on Saturday, October 7. The lead single on his 10th album, Invincible (2001), “You Rock My World” was commercially successful worldwide and peaked at number 10 on the Billboard Hot 100, becoming Jackson’s first top ten song in the United States in over six years.

She is alive and well.

We know how busy everyone is and we greatly appreciate that you took the seconds and minutes to pray for NORA’S SAFETY! PLEASE CONTINUE TO PRAY FOR US AND THE COUNTLESS OTHERS THAT ARE LOST AND NOT FOUND! AMEN AMEN! #wefoundnorapayne #happy #lostandfoundTo God Be the Glory – The Payne and Dobbs Family are ecstatic to report that Nora Payne has been found safe.

Thank you for the prayers as James 5:15 tells us; …the effective (effectual), fervent prayers of a righteous man avails much.

Thank you to those who worked diligently behind the scenes. A very special thanks to Monica Bacon, Sovereign Agency, for her “I’m On-It” spirit. Everyone needs a Monica Bacon on their team.

Thank you for the warm hugs and words of encouragement. Words can never express the outpouring of love felt, and concern for Nora’s safety. The love was felt from far and near!

FAMILY IS EVERYTHING! LOVE Matters. To God Be the Glory! God bless you all.