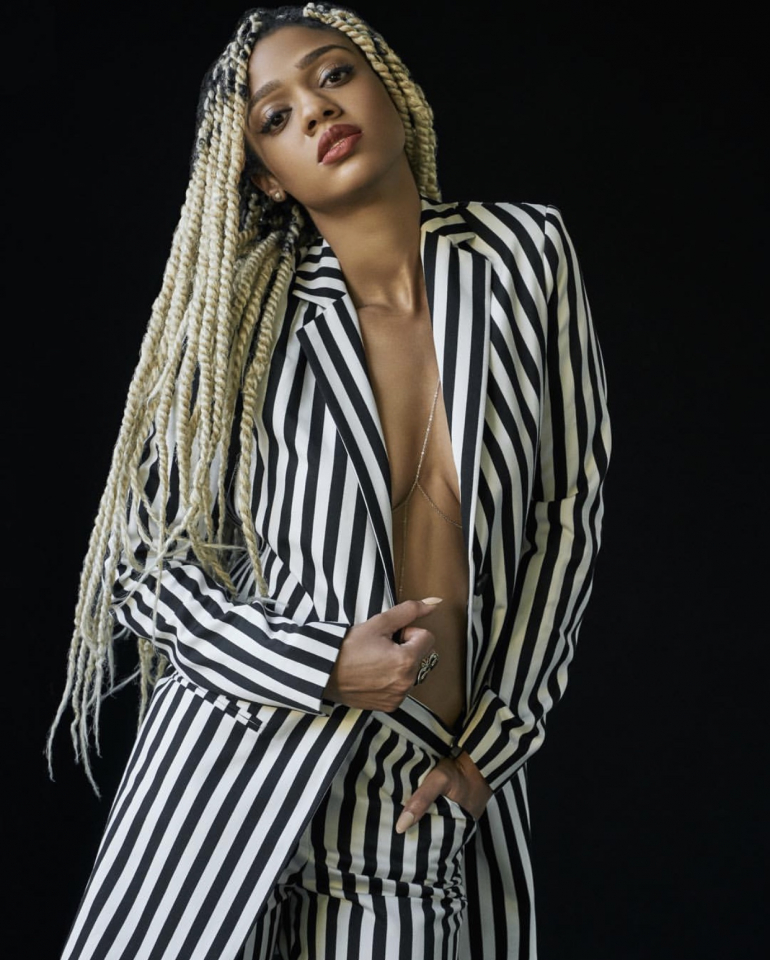 The pressures of Hollywood can sometimes be overwhelming, but actress Tifanny Boone found a way to use that pressure to reenergize her love for acting.

After filming Fox’s The Following, Boone began to feel the need to always be perfect and it began to take a toll on her. To find creativity in a safer medium, Boone found solace and control in arranging flowers.

After taking a break from major roles, Boone is back with Showtime’s The Chi, as Jerrika, a boujie young professional from the southside of Chicago, trying to build a successful career and healthy relationship with her partner played by Jason Mitchell.

Executive produced by Lena Waithe and Common, The Chi premieres January 7, at 10 p.m. on Showtime.

Tell us about your Character in The Chi.
The Chi focuses on these characters from the southside of Chicago. A big event happens, and it affects all of their lives. You see characters who may not necessarily be negative at first, and characters lives intertwine. I play Jerrika who was raised in a better neighborhood on the southside. She is one of the focuses of the series as part of a relationship with Brandon who is played by Jason Mitchell. They are trying to create this wonderful life with strong careers outside of the dysfunction of the families. That is tested by the initial event that affects all of these lives. It’s seeing the struggle of trying to have a healthy relationship in a toxic situation.

What prompted you to want to be a part of this project?
The show was an original pilot from years ago that didn’t get picked up, but the crew came back and decided to do another pilot of it. I auditioned for the original pilot and was obsessed with the sow from the first reading of the script. It felt so honest to me. It felt like the headlines that you really read about the Southside of Chicago. People are about to be able to understand the true humanity behind those headlines. The people on the south side of Chicago aren’t just criminals. These are people trying to do their best, every day. I actually didn’t get the part the first time I auditioned. But I was able to come back again and was so blessed to be a part of it this time.

What did you do after the end of The Following?
After The following, I went back to LA to audition. I did a few projects: Once Upon A Time, Complications and a few other things. I eventually got burnt out and started feeling creatively drained. I took a break and started a business with floral arrangements. It was just a way for me to be creative and to make people happy without all the pressure. That reenergized to come back to acting and move past the pressure. I knew whatever medium, I can find a way to reach people.

What other mediums have you performed on?
I grew up doing theatre. I was in the Baltimore School for Arts for high school, which is where Tupac and Jada went and met there. I got my degree in Theatre at the California institution of the arts. I have an extensive Theatre background.

Out of the three mediums, TV, Film, and theatre, do you have a preference?
I don’t think so. It just depends on the material. What I choose to do is all based on the character and plot. Whatever the best quality of work is, I’m going to want to do that. Of course, the majority of what I do now is film and TV because I live in LA and it’s not that theatre heavy. Hopefully, soon I hope to return to theatre and do something great.

What is it like working with Lena Waithe?
It’s great! We were both previously in similar social circles, but I didn’t know her too well. I first met her when she was a producer for Dear White People, the movie. When I was doing flowers, she was one of my biggest clients. She was very supportive of me. I  think she’s such a talent. It’s great to see people really recognize her. I always want black women to win, and she is winning. The Chi is her baby and we’ve told her, whatever we have to do to make her baby come to life, we will. I’m so excited for people to see how great she is even more.

How is it being natural in Hollywood?
I haven’t put heat on my hair in three years. I think women should wear hair however we want. I had a bunch of friends who were natural and their hair was so pretty, so I tried it. It definitely wasn’t easy auditioning with my hair. Now, people are really embracing it, but at that time, people didn’t. I just kept pushing for my natural hair to be apart of who I am, and people had to accept it. When I first auditioned for The Chi, I had grey Marley twist. They loved it and wanted me to wear my natural hair. They wanted little black girls to see this show and depict that you can have an amazing relationship and career, with an afro. That’s the huge part of us developing this character. She’s supposed to be the boujie character on the show. I hope other natural women find strength with that.