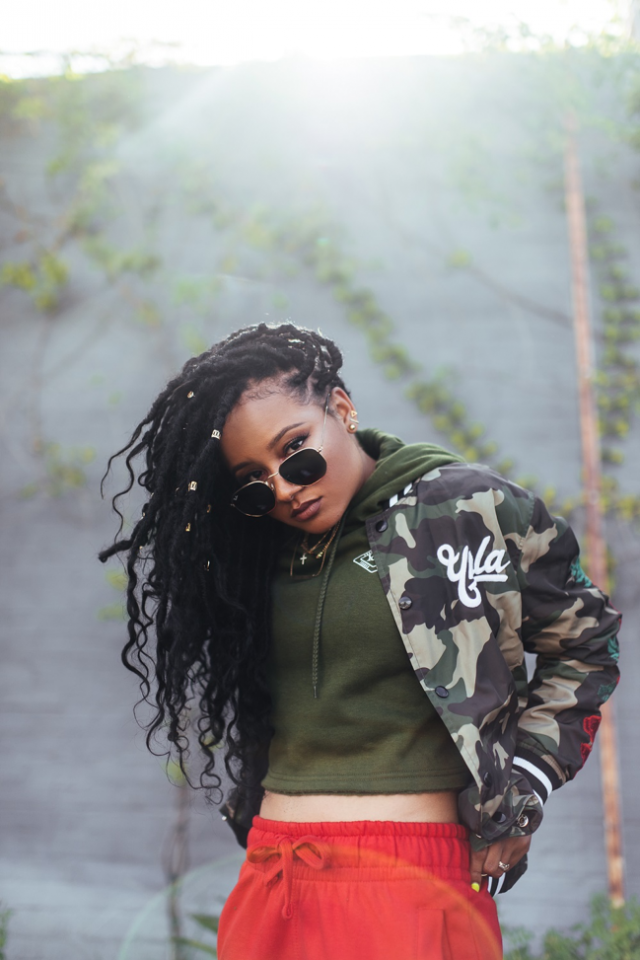 Since the release of her debut album Pretty Girl, Rhyon Brown has been on fire. From the Rising Star Award presented by McDonald’s at the Bounce Trumpet Awards to the creation of a school course based on Pretty Girl, Brown isn’t just creating music, but spearheading the self-love movement.

Rolling out caught up with Brown to talk about the success of her recent projects and how she plans on balancing music and acting.

How does it feel to be honored at the Trumpet Awards?

It feels awesome! I was just telling someone, you don’t work hard for the accolades, but it is nice when someone recognizes your work and wants to support and honor you.

What are you most looking forward to at the show?

You go to award shows, and you’re sitting with people you have admired. I know Keke Wyatt is performing, and who doesn’t love her? I’m excited to see her perform. I’m excited to meet different people including some of the other honorees I have followed for some time like Jermaine Dupri and Richelieu Dennis. Watching what Dennis has done with a Black company, Shea Moisture, and make it worth over $700 million in such a short period, is incredible. I also get to perform, and that is what I was born to do, so, that part I’m really looking forward to.

You started acting when you were very young. How have you evolved as an actress over time?

I’ve had the opportunity to play some roles that have pushed me outside of myself, which is the best thing you could ask for as an actor. Recently, I just booked a series regular role on Empire, so this year will be me balancing the acting and the music. I have a great team of people around me to help me do that.

Is there anything you can tell us about your upcoming role on Fox’s “Empire”?

There’s not too much I can say. I actually just got the go-ahead to talk to the press about it. You’re actually one of the first outlets I’ve told. It’s something very different than people would expect so people should definitely tune in.

How has the reception been for your debut album Pretty Girl?

The reception for Pretty Girl has been more than I could [ever] ask for. I was very honest about me and the things I’ve gone through- as a woman and as a woman in the industry. It was a little nerve-wracking because when you put your soul on a platter for people to pick at, it’s like are they going to like it? Are they going to think it’s weak? What’s going to be the reception? Then people [heard] the music and watched the film, and I can’t tell you how many DMs I get on the daily of girls telling me they feel like that’s exactly what they’ve gone through before.

With all the positive feedback from the album, what’s the main message you want to get out to young girls regarding the influence of social media?

I want young women to know they can be themselves. That is where the true freedom is. So often we go to social and want everything to be this perfect version of our lives, but it’s actually the flaws that make you who you are. The more you show that I find more people appreciate it. Allow yourself the freedom to be who you are.

Since you’ve been in the spotlight for some time, fans often get attached to the younger you. What’s something you want fans to know about the grown-up you?

I think if fans watch my visual album, I think they will see all of those things. Because I took the break for four years to go to school, I was off the scene. It’s like I’m reintroducing myself. I don’t necessarily feel like I’ve been this kid star all my life. I’m a new person, and I feel like I’m starting all over. My new fans have the opportunity to grow with me from now.

Speaking of school, you studied film and production in college. Were you more behind the camera? If you were, do you intend to produce any projects in the future?

Absolutely. The program I was in at USC was the cinematic arts program. For those four years, I was behind the camera — directing, producing, DPing and writing — and I definitely want to continue that in my career. I actually wrote and co-directed the film for my album. I’ve been sitting down with some execs at a few different networks, and they’ve talked about me getting in and being able to direct some of their content. I think being a director makes me a better actor and musician. When you know the different key roles and how to perform in each role, you communicate better.

What else do you have in store this year for your album?

LAUSD, which is the school district in L.A., as well as Compton Unified are taking my Pretty Girl album, and they’re making it into a 12-14 week curriculum program, and at the end of it, there is going to be a scholarship that I give. I’m really looking forward to it. I tell people I’m proud of the film and album, and I’m happy about the conversation it started, but it’s been my vehicle to actually help kids, which is where my heart is.

The Trumpet Awards airs Sunday, February 11, at 9 pm on Bounce.