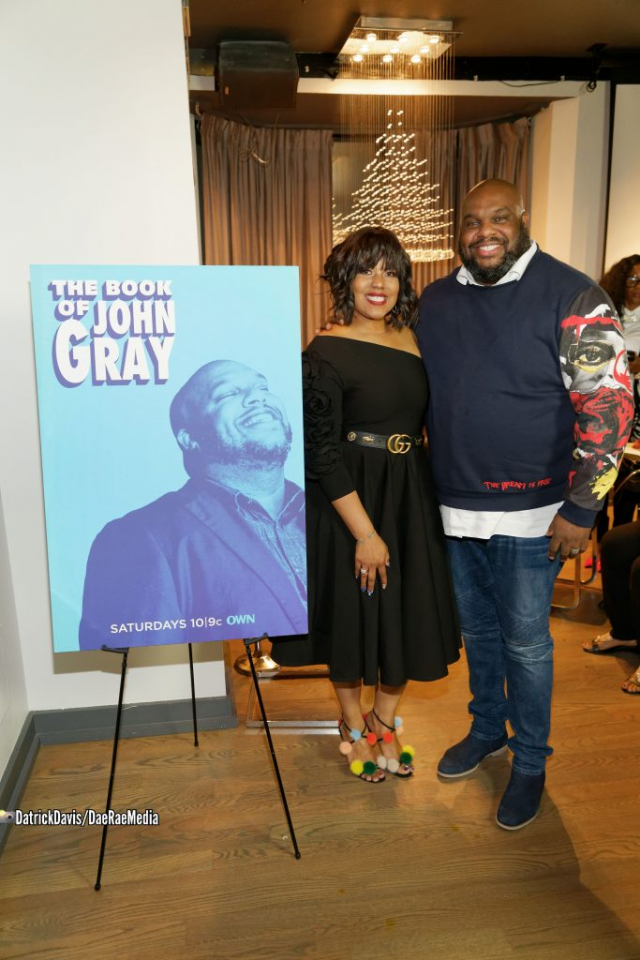 The Oprah Winfrey Network hosted a meet and greet on Thursday, March 22, in Atlanta with pastor John Gray and his wife Aventer Gray. The event was put together to celebrate the second season of the couple’s hit reality show “The Book of John Gray.” The show depicts John and his family as he continues to serve as an associate teaching pastor at Joel Osteen’s world-famous Lakewood Church, while embarking on his new calling as the senior pastor of Relentless Church in Greenville, SC.

Besides discussing the show, John and Aventer gave insights into some of the unknown details about their marriage. They describe themselves as “supernormal people who serve a supernatural God,” and that’s what they believe their show is all about. For them, the show provides an opportunity to create an authentic connection with people.

“I want people to look at the show and see what me and Aventer do and know they can do the same thing in their own way,” John expresses.

Though they understand that they are not for everyone, the connection that they create with their audience is highly important to them; more important than the celebrity status that others have imposed on them. Separating themselves from “reality stars” or “celebrities,” the couple stresses that they’re just like everyone else. John describes how the show or their public personas isn’t impactful on who he and Aventer are and what they do.

He makes his point by using Jesus Christ as the reference for all Christians.

“You’re never so big that you can’t touch the people. Jesus was Jesus, and he touched lepers. He had compassion on multitudes, he fed them himself. He washed stinky feet, dirty feet and he did it before he died,” he says.

And while others bask in the glow of fame, that’s not the case with the Grays. They would rather be known for the impact that they’re making rather than the number of people who know them through a television show or follow them on social media.

“Popularity comes and goes. I don’t want to be popular, I want to be relevant. Relevance means I have a legacy when it’s over. Popularity means I’m fishing for likes or a comment. I don’t care what you think about me on Instagram. You’re not paying any of my bills. And nobody there has a heaven or hell to put me in,” John explains.

Though he’s grateful for the platform, it’s clear that he doesn’t take it lightly. Neither does he see it as an overly important part of his life or the lives of his family.

“I had said to my wife, I just want you to know none of this matters. I said ‘don’t be moved by any of it.’ I’m not moved by any of it and I think the reason God trusted us with this platform is because it doesn’t define us. I’m not going to heaven as a reality star. I’m going as a man who’s fighting to love his wife and take care of his kids,” he says.

When it comes to their marriage, both John and Aventer express that they far from perfect. John pointed out that his wife loves to use the term “becoming,” which he thinks is the perfect word for the state of their marriage. Most people falsely think that two people become one once they exchange vows. From the Grays’ point of view, the entire marriage is a process of two people coming together in an effort to become one. As time passes, each moment is a “becoming” and the couple will continue this process until one dies.

Only a couple of blocks from where they originally took their vows, the couple reminisces about the beginning of their “becoming” after taking vows at the Loews hotel in Atlanta back in 2010. According to them, they were in so much debt and had to use the money from wedding gifts to pay the bills. The two laugh as they remember the times when their bank accounts were in the negative.

“I don’t like the term ‘relationship goals.’ It bothers me,” says Aventer. A health care professional with three degrees, she was able to support John and his vision; even when he didn’t know what that vision looked like.

Though John attributes all of his success to the support of his wife, he admits that when they first got married, he did not notice talented Aventer was, the way he does now.

He admits that he wasn’t always the best husband to Aventer, but values her sticking by his side. Even after battling thyroid issues, she continued to stand strong for him and their family.

“I think I’m a good man, but I’m not a great husband. Not yet, because I don’t know how to be. I’m figuring it out. I don’t always know how to meet her needs. I’m still trying to navigate fatherhood,” he says.

With all of their self-professed faults, you cannot ignore the positive effects that this couple has had on viewers. “There’s no show on TV that allows a Black man to love his wife and raise his kids through the lens of faith,” John points out when explaining the uniqueness of their show. Additionally, viewers get a multidimensional view of this family and their real-life issues. Which goes back to the point of them being two Christians trying to figure it out.

OWN has ordered 16 episodes of “The Book of John Gray,” double last season’s eight. The Grays have been filming since September, with one month left. The new season features celebrities like reality star Tami Roman, actress LeToya Luckett, and singer Michelle Williams.

“The Book of John Gray” airs on OWN on Saturdays at 10 p.m. EST. –martel sharpe