Rolling out and Luster’s Pink search for the New Face of Pink and the grand prize winner will be featured in Luster’s new ad campaign.

To enter the New Face of Pink contest, qualified contestants must take a picture including their favorite Pink product, upload the picture to www.newfaceofpink.com with their information, share their entry profile via social media (Facebook, Instagram or Twitter) using the hashtag #NewFaceOfPink and ask friends and family to vote at www.newfaceofpink.com. Qualified contestants will be required to shoot a 30-second video. The contest officially ends at 11:59 p.m. EST on May 15, 2018. Winners will be announced in June at Blavity’s Summit21 Conference, formerly known as EmpowerHer, in Atlanta. 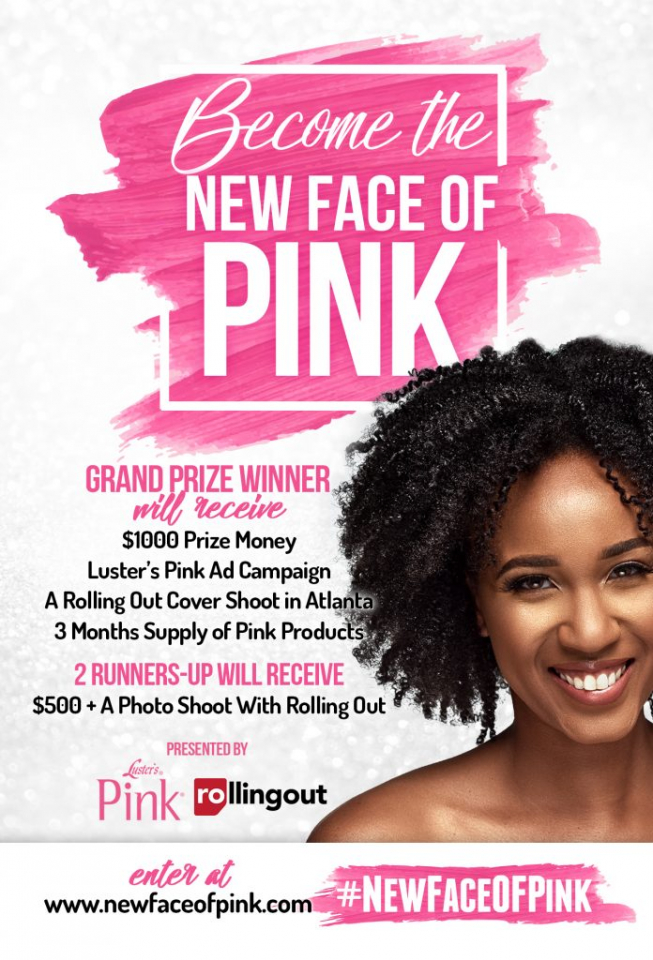 “Terrance Pratt, our director of engagement and entertainment, has utilized rolling out’s 360 media capabilities integrating social media, print covers, beauty influencers, and digital feature stories throughout our digital network of 30 million visitors,” said rolling out CEO Munson Steed. “Collaborating with Luster’s Pink on a fully integrated program shines light on our dedication to amplifying the conversation around women’s beauty and hair care in a manner that is both fun and organic.”

The New Face of Pink winners will be treated to hair, makeup and wardrobe makeovers for the rolling out photoshoot taking place July 16-17 in Atlanta. The public will then have the opportunity to meet the winners at the Ubiquitous Expo, a spectacular two-day beauty, hair and health expo held in Washington, D.C. on August 25-26, 2018.

“We all know when you look good, you feel good. Therefore, it is important for the Luster’s Pink brand to collaborate with rolling out to curate style and beauty content and provide a platform for relevant conversations with a new generation of beauty influencers,” said Resa B. Luster, brand manager at large, Luster Products. “This social media picture and video integration will allow the Pink brand to connect with influencers in the beauty space who play a vital role in shaping how the hair care market is being informed and educated on trends.”