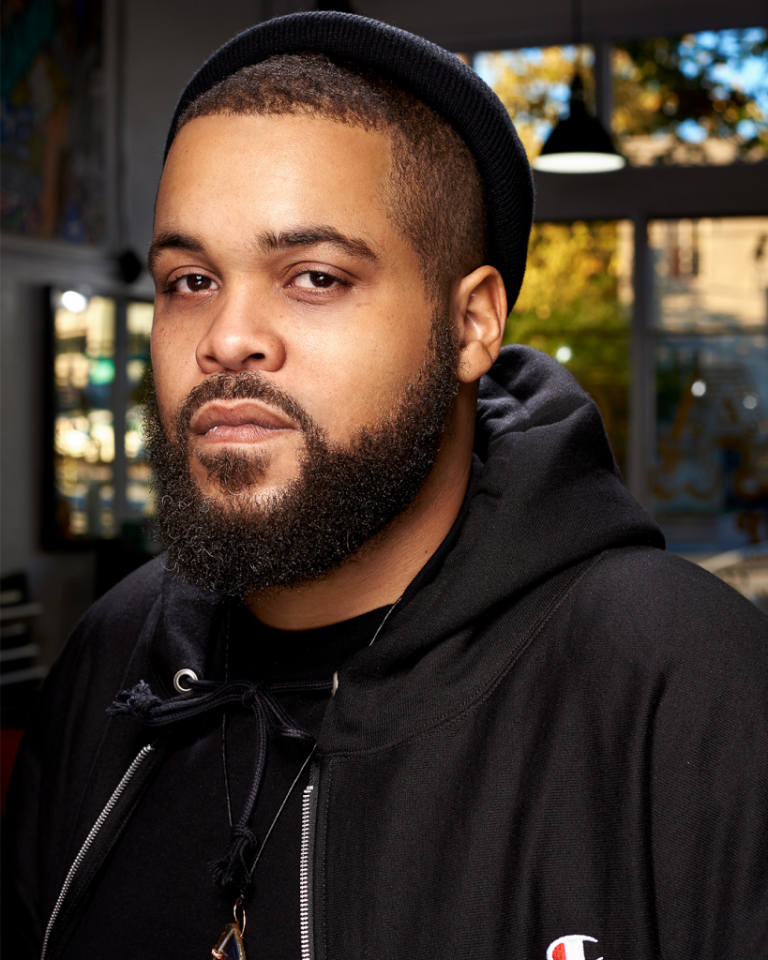 Atlanta resident Big Lurch, aka Lurchero, is a barber at one of Atlanta’s most popular barbershops, Killer Mike’s SWAG Shop on Edgewood. To add, this self-proclaimed renaissance man is also a serious art lover, gallery owner and art event organizer. While he curates “style” (IG: @lurchcutz) at SWAG, as an event curator, he creates experiences; further, as an art gallery owner, he curates opportunities. Big Lurch is passionate about combining his love for the barbershop and making opportunities for people to learn more about art and culture in the city.

How did you get your start as a barber?
I got my start being a barber in the shop as a shop boy. I started cleaning up the barber shop and one day one of the barbers asked me to give him a bald head. It went from there to cutting my little brother’s hair, to my friends, to anyone who would let me butcher their heads. Eventually, I started apprenticing under some of the local barbers. I didn’t take it seriously for a while; I was just cutting hair. I just had the opportunity to be around good barbers who could trade me but I wasn’t sure this is what I wanted to do.

When did you know that being a barber is what you wanted to pursue wholeheartedly?
I still teeter on it sometimes, but I realized that I could make a comfortable living out of it working with a couple barbers like Mario from South Carolina, who owned his own shop. For a long time, I treated it like a hustle, like I can just cut some hair here while this job isn’t going well or this other thing I’m pursuing isn’t working out. I could just cut a little hair and it would get me by. After a while, I realized it allowed me to do the other things that I wanted to do. It allows me the freedom to set my own schedule.

What is your style as a barber?
I try to keep things as natural as possible. I don’t do a lot of extras, sprays or cosmetic stuff. It’s pretty much whatever you come in with were going to make that look a whole lot better. I do a very good fade and a very crisp line.

Tell me about Killer Mike’s barber shop, Swag Shop?
I absolutely love the shop. I love my coworkers. The vibe is not your average barbershop. We might have a popup or different merchants that come in to showcase their stuff to the community. We might even have a DJ in there. It, being Killer Mike’s shop, already means something, as well. He’s interviewed Bernie Sanders in there. There have been some real influential people who have come in and out the shop.

What advice do you have for young people wanting to start out as a barber?
They should get with a master barber and see if they are available and willing to apprentice you. That is one way to go about it and is really to the only alternative to going to cosmetology school. Through an apprenticeship, you can not only learn the trade, but the business of barbering and that’s more than turning the clippers on and off.

How would you describe barbershop culture?
Barbershop culture is something that is very necessary, especially in the Black community, for Black men especially. It’s a place that’s a safe haven. Black men walk around with a target on their backs, so when you walk in the shop, it doesn’t really matter what you have going on outside; all of that gets left at the door. It’s a place that we can feel comfortable expressing what we might not feel comfortable expressing elsewhere.

Tell me about your work as a curator.
I curate different art shows and gallery shows. I put on different events. One was an art photo and natural hair exhibit. We did it at the last shop where I worked. We brought different photographers and artists in and allowed the crowd to interact with them. So, over the course of five different events, different photographers would shoot the crowd as if they were in the barber chair. We just wrapped up participating in the ARTlanta fair at Fort McPherson. We turned one of the bungalow houses into Camp OPE. It was an interactive experience good for parents and kids and everyone had a good time.

Tell me about the OPE gallery.
I have a small venue called the OPE gallery off Edgewood Avenue that holds about 60-70 people. Primarily, our goal is to cultivate new, up-and coming artists. It’s for people who haven’t been able to get into the bigger galleries. I try to look for people that I recognize talent in but I know they just need a little more exposure. We have a couple solo shows and a group show coming up.