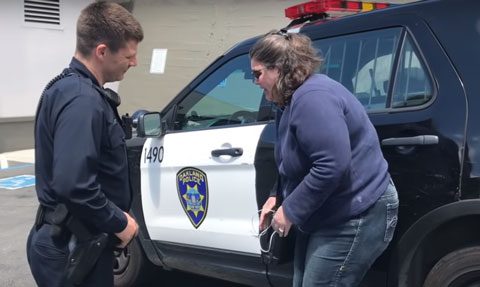 Racist woman calls police and lies on a Black family in Oakland, California, over a barbecue (Image Source: YouTube screenshot)

If you have been wondering whether there is an increase in racist White people antagonizing peaceful Black people, wonder no more, it is true. The latest incident comes from Oakland, California, where a White woman tells a Black family that she is on the phone with the police because their charcoal barbecue grill was illegal in the park. She demanded that they respect her White privilege and stop barbecuing and leave the park. However, the family was in a zone designated for barbecuing.  According to one witness, the woman hurled several racial slurs at them and threatened that they’d soon be going to prison for their Sunday afternoon actions.

But she did not count on a Black woman challenging her bigotry who was armed with a cellphone. It turned out that the White woman never was on the phone with police and became frightened. The racist White woman then calls the police and tells the 911 operator she is being shoved and chased by Black people as she walks hurriedly to a nearby store. When police arrive the White woman begins shedding tears as she tells police about her traumatic experience. The video can be viewed below.