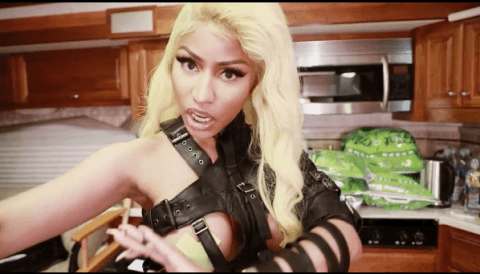 Nicki Minaj has teased a collaboration with YG, 2 Chainz, and Big Sean.
The 35-year-old rapper is set to release her fourth studio album ‘Queen’ next month and has now seemingly hinted at a collaboration with several rap stars as she posted a video on Instagram which featured a muffled song, and tagged the three rappers in the caption.
She wrote: “Ayo @yg @2chainz @bigseanWHAT’S GOOD?!??!!!!!!!! Big [money] Take Lil [money] T O M O R R O W NIGHT (sic)”
Nicki also hinted at the collaboration on Twitter when she told fans she had an announcement to share.
“I may go live for the announcement so be sure to have your WiFi situated within the next 30mins to an hour,” she wrote. “You guys, after careful consideration, I’ve decided to do my announcement tmrw when most of my fans all around the world are wide awake. A lot of them are asleep right now due to it being like 3 or 4 in the morning in their various countries. Let’s do 3 pm EST tomorrow. [love] you (sic)”
But fans were left confused after Nicki seemingly canceled her announcement when one fan joked “Half your TL is busy tomorrow sis wyd”.
“Ok well why don’t I just scrap it altogether? No announcement. And another hiatus. XO,” Nicki wrote in response.
Fans of the ‘Anaconda’ hitmaker quickly took to social media to beg her to share the news, and she eventually agreed to give her announcement on Thursday (24.05.18), at around 3 pm EST as originally promised.
“Love you guys so much,” she wrote. “Tomorrow I’ll feel a lot better & I’ll have more energy to interact with you when I DO go live. hold me down.”
As of the time of writing, it isn’t known whether Nicki’s Twitter announcement will be the release of the song she teased on Instagram, but it has been speculated that the two events are linked.