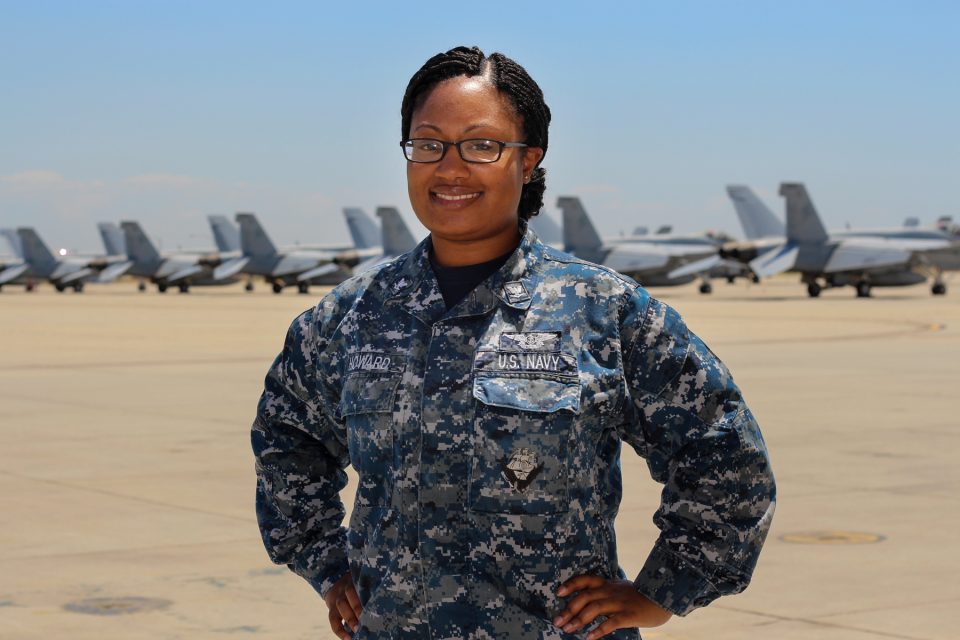 Columbia High School graduate and Decatur, Georgia, native Te’Yana Howard is currently serving with a U.S. Navy strike fighter squadron, which flies one of the world’s most advanced warplanes with one of the most expensive weapons systems ever developed. Petty Officer 3rd Class Howard is a logistics specialist with the Blackknights of VFA 154. Members of VFA 154 work with the F/A 18 Super Hornet, one of the most advanced aircraft in the world. The Super Hornet takes off from and lands on Navy aircraft carriers at sea and is capable of conducting air-to-air combat as well as striking targets on land. It is approximately 61 feet long, has a loaded weight of 51,000 lbs., and a max speed of 1,190 miles per hour. Howard’s squadron operates out of Naval Air Station Lemoore. As Navy logistics specialist, she is responsible for procuring, receiving and issuing parts for work centers, as well as financial management for the squadron.

Operating from sea aboard aircraft carriers, the Super Hornet gives the Navy the power to protect America’s interests anywhere, at any time. The versatile jet has the ability to destroy targets located hundreds of miles inland, without the need to get another country’s permission to operate within its borders.

“Strike Fighter Wing, U. S. Pacific Fleet, based at Naval Air Station Lemoore, California, is the heart of Naval Aviation,” Capt. James S. Bates, Deputy Commodore, Strike Fighter Wing, U.S. Pacific says in a statement. “The sailors assigned to SFWP always exceed expectations and produce amazing results through teamwork and dedication to their department, squadron, the U.S. Navy and their family. Naval Aviation is a challenging occupation, but our sailors work day in and day out to provide fully mission capable aircraft and fully qualified aircrew to ensure leadership is able to answer national-level tasking. I am humbled to be able to lead the sailors of SFWP and I am proud to call Lemoore my home.”

Howard has military ties with family members who have previously served and is honored to carry on the family tradition.

“My mom was in the Air Force and grandfather was in the Army…he taught me to be respectful. When you are respectful, you will receive respect back. I try to apply that to my Navy career now,” Howard adds. “My grandfather really encouraged me to join the military because it would open opportunities for me.”

As a member of one of the U.S. Navy’s most relied-upon assets, Howard and other sailors know they are part of a legacy that will last beyond their lifetimes providing the Navy the nation needs.

“Joining the Navy meant that I could go to school for free and get the work experience to stand out on my resume,” Howard says. “It really meant bettering myself.” –Kayla Turnbow, Navy Office of Community Outreach