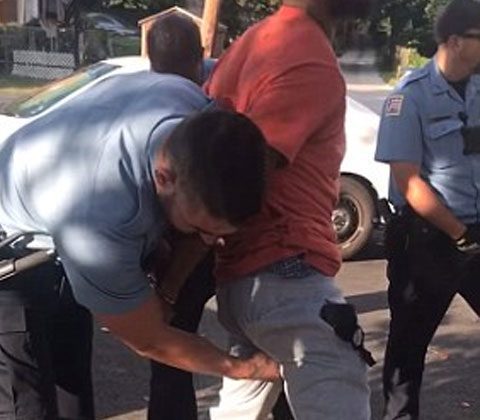 M.B. Cottingham was subjected to a humiliating search by a Metropolitan Police officer on a public street (Image source: YouTube screenshot)

A Black man in Washington, D.C., has received some semblance of justice after enduring repeated public humiliations by police.

A video of that search was made by witnesses and went viral on social media. The ACLU joined with Cottingham to sue the city over the September search, stating that he was targeted because he is Black.

The lawsuit contends that Lojacono violated Cottingham’s Fourth Amendment right against unreasonable searches. After a review of the tape, MPD Chief Peter Newsham admitted during a D.C. City Council meeting that “it looked like it was an inappropriate touching by the officer.”

The ACLU issued a statement about the incident that reads in part ” … Officer Lojacono far exceeded the scope of a standard pat-down for weapons by jamming his fingers between Cottingham’s buttocks, sticking his thumb in his anus, and grabbing his scrotum, all through his sweatpants. After Cottingham flinched and verbally protested, Lojacono and another officer handcuffed him and proceeded to continue the intrusive search in the same manner and area for several more seconds.”

As a result, Lojacono’s past disciplinary infractions were reviewed, and he was fired in September 2018. However, the officer is appealing his termination, and he was placed on administrative leave pending further review.

According to the ACLU, the city and MPD admitted no wrongdoing and have reached a settlement with Cottingham for an undisclosed amount. In a statement released by the ACLU, Cottingham said, “The most important thing to me is that officer Lojacono can’t do this to anyone else. I filed this lawsuit because I want policing in D.C. to change.”

The video of the public cavity search and humiliation of Cottingham can be viewed below: